As virus surges in Eastern Europe, leaders slow to act

BELGRADE, Serbia (AP) — At the main hospital in Romania’s capital, the morgue ran out of space for the dead in recent days, and doctors in Bulgaria have suspended routine surgeries so they can tend to a surge in COVID-19 patients. In the Serbian capital, the graveyard now operates an extra day during the week in order to bury all the bodies arriving.

For two months now, a stubborn wave of virus infections has ripped mercilessly through several countries in Central and Eastern Europe, where vaccination rates are much lower than elsewhere on the continent. While medical workers pleaded for tough restrictions or even lockdowns, leaders let the virus rage unimpeded for weeks.

“I don’t believe in measures. I don’t believe in the same measures that existed before the vaccines,” Serbian Prime Minister Ana Brnabic said last month as the Balkan nation sustained some of its worst daily death tolls of the pandemic. “Why do we have vaccines then?”

A World Health Organization official declared earlier this month that Europe is again at the epicenter of the coronavirus pandemic. While several Western European countries are seeing spikes in infections, it is nations to the East that are driving fatalities. Romania, Bulgaria and the Balkan states recorded some of the highest per-capita death rates in the world in the first week of November, according to the WHO.

Experts say fumbled vaccination campaigns and underfunded and mismanaged health systems set the stage for the latest outbreaks, which gathered pace as leaders dithered. Some are acting now — but many doctors say it took too long and is still not enough.

Many governments in the region are facing elections soon, and that no doubt made them reluctant to force people to get vaccinated or impose unpopular lockdowns even in former Communist nations that once carried out mandatory inoculations without hesitation or where leaders were quick to introduce closures earlier in the pandemic.

But politicians’ failure to quickly heed the calls of the medical community has likely undermined an already weak trust in institutions in countries where corruption is widespread. Misinformation about vaccines has also found fertile ground amid the broader distrust of authority.

That has left countries stumbling through the latest surge with few protections. While nations around the world have struggled with resistance to vaccines, many in Central and Eastern Europe have particularly low rates for places where supply is not an issue. Bulgaria and Romania, both in the European Union, have fully vaccinated about 23% and 35% of their populations, respectively. Bosnia and Herzegovina has just 21% fully vaccinated.

Referring to Romania’s slow response, physician and health statistician Octavian Jurma described his country as a “textbook example” of the “tragic consequences produced by a political takeover of the pandemic response.”

Leaders finally introduced a curfew this month, requiring people who don’t have a COVID pass — which shows proof of vaccination, recovery from the illness or a negative test — to stay at home from 10 p.m. to 5 a.m. Infections have since dropped slightly, but hospitals remain overwhelmed.

At the main one in Bucharest, the bodies of those who died from COVID-19 lined a hallway in recent days because there was no room in the morgue. Part of a waiting room was transformed into an emergency ward, with the raising of a plastic sheet.

In Serbia, some hospitals are so swamped that they are only handling virus patients — leaving doctors to sue Brnabic, whose government faces elections in April.

“Since Brnabic said she doesn’t believe in measures, some 900 people have died,” Slavica Plavsic, a lung disease specialist, told N1 television on Oct. 21.

The prime minster has rejected that criticism, saying Thursday that she is proud of her government’s response.

Meanwhile, authorities at the graveyard in Belgrade say that now they have an average of 65 burials a day, compared with between 35 and 40 before the pandemic. Gravediggers now bury people on Sundays — which typically they didn’t — to handle the load.

In neighboring Hungary, few mitigating measures are in place. Like Serbia’s, Hungary’s government says it would prefer to rely on vaccinations. With nearly 60% of people fully vaccinated, the country is better placed than most in the region — but that still leaves a large swath of the population unprotected.

Hungary’s government earlier this month ordered mask-wearing on public transportation and allowed private employers to mandate vaccines for their staff.

But Gyula Kincses, chairman of the Hungarian Chamber of Doctors, said that that was “too little, too late” and recommended that masks be made mandatory in all indoor spaces.

In a recent radio interview, Prime Minister Viktor Orban, whose populist party faces election next spring, said that mandatory vaccinations would “be beyond the limits of what Hungarians will accept,” even while acknowledging the new restrictions could only slow, not stop, the virus’s spread.

Hospitals in Bulgaria, with its low vaccination rate, were forced to temporarily suspended all non-emergency surgeries so more doctors could treat the influx of COVID-19 patients.

“Politicians now think only about the elections, but there inevitably will be a lockdown, however in tragic circumstances,” Ivan Martinov, a leading cardiologist at Sofia’s main emergency hospital, told national radio. Parliamentary elections are being held Sunday.

Soaring infections appear to have been a wake-up call to some extent in Croatia, which saw unusually large lines of people waiting for vaccines in recent days.

Authorities said on Wednesday that more than 15,000 people received their first dose a day earlier — a significant jump after vaccinations all but halted in the Adriatic country of 4.2 million.

But medical organizations in Slovenia have warned that the Alpine country’s health system is still on the verge of collapse. They urgently appealed to people to do their best to avoid seeking urgent care in the coming months.

“There are traffic accidents, accidents at work, other infections,” gasped Bojana Baovic, head of Slovenia’s Medical Chamber. “This is an alarming situation that we can cope with through maximum solidarity.”

Follow AP’s coverage of the coronavirus pandemic at https://apnews.com/hub/coronavirus-pandemic. 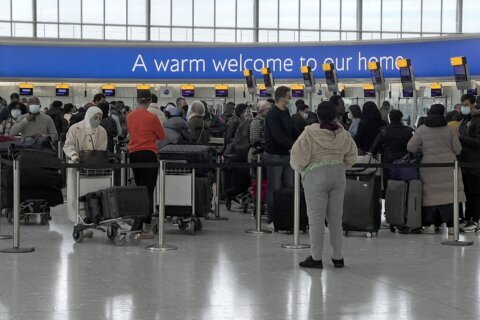 The Latest: CDC says ages 18 and up should get booster shot