Fauci says Moderna boosters might not be ready by September 20

▶ Watch Video: Fauci says Moderna boosters might not be ready by September 20

Washington — Dr. Anthony Fauci, chief medical adviser to President Biden, said Sunday that booster shots for Americans who received Moderna’s two-dose COVID-19 vaccine may not be ready by September 20, when the Biden administration said it will begin to roll out the extra shots for vaccinated adults.

“We were hoping that we would get both the candidates, both products, Moderna and Pfizer, rolled out by the week of the 20th. It is conceivable that we will only have one of them out, but the other will likely follow soon thereafter,” Fauci, the director of the National Institute of Allergy and Infectious Diseases, told “Face the Nation.”

Fauci and top federal health officials announced in August that vaccinated Americans will need to get booster shots eight months after receiving their second vaccine dose, subject to approval from the Food and Drug Administration (FDA) and Centers for Disease Control and Prevention (CDC). The administration said it is prepared to begin offering the boosters the week of September 20, with those who were the earliest to get vaccinated — health care workers, nursing home residents and the elderly — first to get the shots.

While Pfizer has submitted data to federal officials, there is insufficient data from Moderna on safety and efficacy, Fauci said. Still, he said the drug maker is collecting its data to give to the FDA, which will then make a determination on whether to green-light the third doses of its vaccine.

“We hope that Moderna would also be able to do it so we could do it simultaneously, but if not, we’ll do it sequentially,” Fauci said. “So the bottom line is very likely at least part of the plan will be implemented, but ultimately the entire plan will be.”

Fauci said any delay in offering Moderna’s booster after the September 20 roll-out date would amount to “at the most a couple of weeks,” if there is one.

He also said studies are underway about whether Americans could mix the vaccines — getting two doses of Pfizer and one of Moderna, or vice versa — and hopes data will be available “within a reasonable period of time, measured in a couple of weeks.”

“But right now, we are suggesting and hopefully it will work out that way, that if you got Pfizer, you will then boost with Pfizer. If you get Moderna, you’ll be boosting with Moderna,” Fauci said. “But we are doing the studies to determine if we can do just that: Switch one with the other.”

In announcing the recommendation for boosters, top federal health officials said the additional doses would be needed to maximize the vaccine’s protection against COVID-19 and extend its durability, especially given the dominance of the highly contagious Delta variant.

The strain has driven a rise in COVID-19 infections and hospitalizations, particularly among those who have not received their vaccines. The CDC also reported a spike in hospitalizations for teenagers and children. Pfizer’s COVID-19 shot is available for people over the age of 12.

Fauci said the surge in infections among younger Americans can be attributed to the transmissibility of the Delta variant, though the data being collected by federal health agencies does not give definitive information that the variant is more severe in children.

“We know certainly more children are getting infected and therefore more are getting hospitalized,” he said. “But we don’t have definitive enough data to say that is fact on a child by child basis, that it’s any more severe.”

Biden to double US global donation of COVID-19 vaccine shots 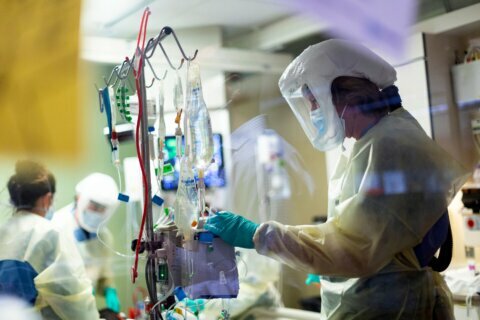 COVID vaccines are on the way for younger kids: Here’s why they’re different