It will be weeks before the Biden administration is expected to have enough data to guide its planning on booster doses for Americans who received Johnson & Johnson's COVID-19 vaccine.
Listen now to WTOP News WTOP.com | Alexa | Google Home | WTOP App | 103.5 FM

It will be weeks before the Biden administration is expected to have enough data to guide its planning on booster doses for Americans who received Johnson & Johnson’s COVID-19 vaccine, say multiple people familiar with the administration’s deliberations. Top federal health officials are waiting for results from studies run by the drug maker and a government-backed trial.

The White House said Wednesday that Americans who received Pfizer and Moderna shots should get booster shots eight months after their second dose, and at the same time advised that Johnson & Johnson vaccine recipients would eventually also need an additional shot. Some 13.8 million Americans have received the drug maker’s single-shot vaccine.

However, officials have yet to decide whether those who took the Johnson & Johnson shot should receive a second round of that vaccine or switch to an additional shot from the other vaccine makers.

“The J&J vaccine was not administered in the U.S. until March of 2021, and we expect more data on J&J in the coming weeks. With those data in hand, we will keep the public informed with a timely plan,” Surgeon General Vivek Murthy told reporters on Wednesday.

The worrying signs of waning immunity that prompted this week’s booster announcement from the Biden administration have so far mostly excluded Johnson & Johnson’s vaccine.

The CDC’s finding that in in nursing homes, vaccine effectiveness diminishes over time only focused on recipients of the Pfizer or Moderna shots, which were the only ones available for the groups prioritized first for vaccination. Researchers examining the “sustained effectiveness” of the Pfizer and Moderna shots against hospitalization also excluded Johnson & Johnson, citing “limited use of the vaccine during the surveillance period.” And in the agency’s report of decreasing effectiveness among New York adults, less than 9% had received the single-shot vaccine.

But a handful of studies — ranging from antibody research that has yet to be peer-reviewed to anecdotal reports of more hospitalizations in outbreaks among vaccinated people — have raised concerns that Johnson & Johnson’s vaccine may be offering inferior protection in the face of the Delta variant.

Which booster is best?

Johnson & Johnson has touted some early data from its own research suggesting that immunity created by its single-shot regimen appears “strong and stable” for at least eight months after people were first vaccinated. Their results suggest that the vaccine remains effective against disease caused by the Delta variant, which now makes up nearly all cases in the U.S.

Beyond that, the Biden administration is waiting for more data to be finalized from ongoing research by the vaccine maker — some of which has already been seen by top federal health officials — that could ultimately determine whether and how the Food and Drug Administration authorizes a second shot of the vaccine as safe and effective at boosting immunity.

One study launched by Johnson & Johnson in November administered second shots to participants close to two months after they began their regimen. An earlier trial launched last summer gave some participants booster doses after six, 12, or 24 months.

“We are engaging with the U.S. FDA, CDC, and other health authorities and will share new data shortly regarding boosting with the Johnson & Johnson COVID-19 vaccine,” the company said in a statement late Wednesday.

The Biden administration is also waiting for early results from a trial announced by the National Institutes of Health in June that has tested pairing a wide array of vaccine combinations, including a so-called heterologous boost for people first vaccinated with Johnson & Johnson’s vaccine with a second round from Pfizer or Moderna.

The trial’s scientists hope to finalize some of their earliest results by the end of August, acknowledging the pivotal role their data could play in informing the White House’s booster strategy.

“Our original intention was to release results as early as early September. We are pressing to get that a little bit more accelerated, but we have lots of different arms and people, meaning a lot of different cohorts of groups that have all these different combinations,” says Dr. Kirsten Lyke, a professor at the University of Maryland, who is helping to lead the study.

Though decisions abroad to mix-and-match AstraZeneca’s adenovirus-based vaccine with a dose from Pfizer have not turned up any major safety concerns, Lyke says the trial will look for any “unanticipated side effects” in combining the two different vaccine platforms. Johnson & Johnson’s shot is also an adenovirus-based vaccine, unlike the mRNA technology used by Pfizer and Moderna’s shots.

Scientists will also scrutinize the immune response measured in samples drawn from trial participants, looking for signs of boosted protection against the virus.

“What we can do is look very carefully at both the neutralizing antibody response and the ability of antibodies to suppress wild type, the Wuhan strain, and the Delta variant, or any other variant of concern that we want to measure it against,” said Lyke.

For now, federal health officials have continued to urge Americans vaccinated with Johnson & Johnson’s shot not to seek unauthorized additional doses of any vaccine.

“When you do that there are issues of safety, that you don’t collect the data in an orderly fashion to know if it’s actually safe,” Dr. Anthony Fauci, the president’s chief medical adviser, told California radio station KNX 1070 on Friday.

The CDC recently said that more than 90 thousand recipients of Johnson & Johnson’s dose — less than 1% of all those vaccinated with the single-shot vaccine — have sought at least one additional dose.

Some providers have openly flouted the rules laid out by the FDA and CDC, which currently only allow for additional shots in Pfizer or Moderna recipients who are immunocompromised.

“There’s no reason to believe that it’s not going to be safe. But you want to do things in a way where you can collect data and make broad and meaningful recommendations and guidelines for people, so that everybody can make a decision based on solid science,” said Fauci. 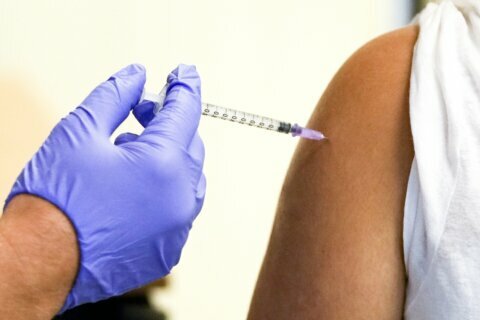