Washington — Dr. Anthony Fauci, head of the National Institute of Allergy and Infectious Diseases, expressed a sense of relief on the second day of working in President Joe Biden’s administration, praising the new president for his commitment to “let the science speak.”

At a White House briefing with press secretary Jen Psaki, Fauci told reporters that the responsibility Mr. Biden has entrusted in him gave him “somewhat of a liberating feeling,” compared to his experience serving under former President Donald Trump.

“Obviously, I don’t want to be going back over history, but it was very clear that there were things that were said, be it regarding things like hydroxychloroquine and other things like that, that really was uncomfortable because they were not based on scientific fact,” Fauci said. “I can tell you, I take no pleasure at all in being in a situation of contradicting the president.”

He added that, under Mr. Trump, “you didn’t feel that you could actually say something and there wouldn’t be any repercussions about it.”

“The idea that you can get up here and talk about what you know, what the evidence, what the science is and know that’s it, let the science speak. It is somewhat of a liberating feeling,” Fauci said of the new administration. 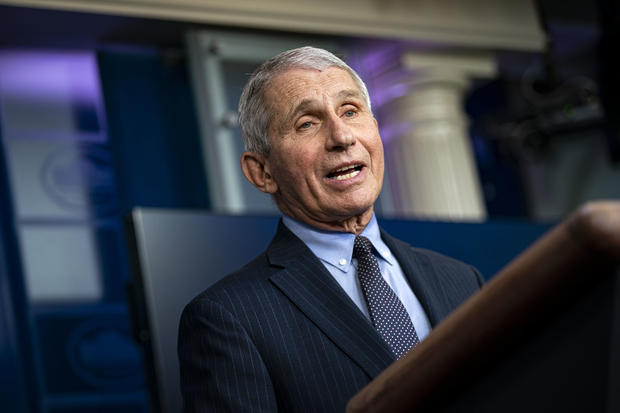 Dr. Anthony Fauci speaks during a news conference at the White House on Thursday, January 21, 2021.

Fauci’s appearance in the briefing room on the first full day of Mr. Biden’s term reflected his increased presence in the White House’s public pandemic response, touted by the president earlier in the day. “You’re going to be hearing a lot more from Dr. Fauci again, not from the president, but from the real genuine experts and scientists,” Mr. Biden said when rolling out his national strategy for defeating the coronavirus pandemic.

Fauci said another difference between the two administration’s is Mr. Biden’s commitment to honesty.

“One of the new things in this administration, if you don’t know the answer, don’t guess. Just say you don’t have the answer,” Fauci said, echoing a promise by the president made earlier in the day, when he said his team “will level with you when we make a mistake.”

Psaki, who served as White House communications director under President Barack Obama and as a spokesperson at the State Department, told reporters during her first briefing on Wednesday that she and Mr. Biden discussed prior to his inauguration the “importance of bringing truth and transparency back to the briefing room.”

“There will be times when we see things differently in this room,” she said. “That’s OK. That’s part of our democracy, and rebuilding trust with the American people will be central to our focus in the press office and in the White House every single day.”

The new press secretary has vowed to make the press briefings a daily occurrence. The promise of regular briefings was a break with her immediate predecessors in the Trump White House, whose appearances in the briefing room were sporadic and combative.

The new administration focused its first full day in office on the federal response to the coronavirus crisis, with the president using his executive authority to bolster production of vaccines, test supplies and personal protective equipment. The president has set a goal to administer 100 million shots during his first 100 days in office.

According to Psaki, the Trump administration was given 36 million vaccine doses and administered a total of about 17 million shots, for a rate of fewer than 500,000 shots a day. “What we are proposing is to double that to about 1 million shots per day,” she said, adding that the Biden team has been forming its plan to achieve this milestone “for some time.”

“There are a number of challenges. It’s not just about lining people up … in a football stadium and giving them shots,” she said. “We have to overcome vaccine hesitancy, we have to get to … communities where they don’t have access to health centers.”

“A number of steps to address that was outlined in the president’s plan today. But this is a bold goal, we’re going to work everyday to achieve it.”