The White House's testing operation proved woefully insufficient in protecting the president and those who work for him at the White House, as evidenced by a string of positive coronavirus tests over the past week for President Trump, his wife and others in their orbit.
Listen now to WTOP News WTOP.com | Alexa | Google Home | WTOP App | 103.5 FM

WASHINGTON (AP) — His press secretary once described President Donald Trump as the “most tested man in America” when it came to COVID-19. And variations on that message were the White House ready response any time critics questioned the president’s lax approach to following guidelines for avoiding the novel coronavirus.

But that testing operation proved woefully insufficient in protecting the president and those who work for him at the White House, as evidenced by a string of positive tests over the past week for Trump, his wife and others in their orbit.

Trump demonstrated in dramatic fashion that relying on testing alone isn’t enough to create a safe bubble. Mask wearing and social distancing are other key ingredients for preventing the spread of COVID-19, and both have often been in short supply at the White House.

From the earliest days of the virus, Trump has provided conflicting advice on wearing a mask, noting that federal health experts were recommending them, but adding that “I don’t think I’m going to be doing it.”

And just last week, he poked at Democratic presidential rival Joe Biden on the topic: “Every time you see him, he’s got a mask. He could be speaking 200 feet ways from them, and he shows up with the biggest mask I’ve ever seen.”

“He’s tested more than anyone, multiple times a day. And we believe that he’s acting appropriately,” White House press secretary Kayleigh McEnany said in July when asked whether the president was sending mixed messages on mask wearing. McEnany herself tested positive for the virus on Monday, she said.

A negative test result can sound reassuring, but it doesn’t necessarily mean a person is free from the coronavirus and not contagious. When the virus enters the body, it takes over a cell’s machinery to copy itself, while fending off the body’s immune defenses. But the process takes a few days, so it can take a while before viral particles can be detected by a test. In other words, testing too early can mean no virus will be collected on the swab.

There are other reasons for false negative test results. A test could be conducted poorly and not get a good sample. And compared with other tests, rapid tests return more false negatives. The Food and Drug Administration has said the Abbott ID Now test — one used for screening at the White House — is meant to be used with people who are suspected of being sick and a negative test result doesn’t rule out COVID-19.

“It’s helpful to keep in mind that tests discover the presence of coronavirus once there’s enough viral material in a person to be able to detect it,” Abbott spokesman John Koval said in an email. “No test detects the virus immediately after the person becomes infected.”

The main benefit of testing, Shahpar said, is to identify people with infections and isolate them before they can spread the disease to others.

“Tests can have false positives and false negatives, and no test is perfect. It is also just a snapshot of the situation when the person was tested,” Shahpar said.

Asked if the testing provided a false sense of security, spokesman Judd Deere said the physician to the president and the White House Military Office worked with the White House to “ensure all plans and procedures, including testing, incorporate current CDC guidance and best practices for limiting COVID-19 exposure to the greatest extent possible.”

Health experts also advise social distancing, but that recommendation has been ignored for several recent White House events, most notably his nomination acceptance speech on the South Lawn in late August and a Sept. 26 Rose Garden ceremony announcing the nomination of Judge Amy Coney Barrett to serve on the Supreme Court. While the events were held outdoors, attendees sat shoulder-to-shoulder with barely a mask in sight.

Trump gathered more than 150 people in the Rose Garden, where they mingled, hugged and shook hands — overwhelmingly without masks. There were also several indoor receptions, where Barrett, her family, senators and others gathered in the close quarters inside the White House.

There’s no way to know if the Rose Garden event was where Trump was exposed. The president had a full week of official and campaign events before his hospitalization Friday. 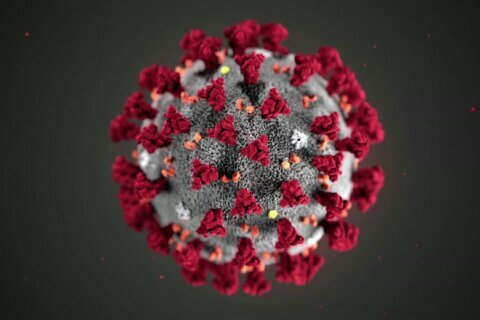