The U.S. Secret Service was hit with a coronavirus outbreak in August at its training center in Maryland when at least 11 people tested positive for the virus.
Listen now to WTOP News WTOP.com | Alexa | Google Home | WTOP App | 103.5 FM

The US Secret Service was hit with a coronavirus outbreak in August at its training center in Maryland when at least 11 people tested positive for the virus, according to a report by The New York Times.

Some employees at the facility were thought to have contracted the virus during training exercises and at a graduation party at a nearby hotel where they did not practice social distancing, the Times reported Friday, citing officials with knowledge of the matter.

CNN has reached out to the Secret Service for comment.

The Secret Service had also closed the training center from March to June to enact safety protocols to mitigate the spread of coronavirus, the Times reported.

Julia McMurray, a spokeswoman for the Secret Service, told the Times that the agency had implemented several safety procedures, including temperature checks, conducting classes outdoors and requiring its agents to wear personal protective equipment during close-contact drills.

McMurray declined to provide the Times with a total number of confirmed cases among Secret Service agents.

“Any U.S. Secret Service employee who may have tested positive would have been immediately isolated and returned home and out of the working environment. Considerations would also be taken to ensure the least amount of contact with the public,” McMurray told the Times. “Throughout the pandemic, the U.S. Secret Service has taken significant precautions at its training center to protect the health and welfare of its trainees and training staff.”

In June, two Secret Service agents tested positive for the virus after working President Donald Trump’s indoor rally in Tulsa, Oklahoma. Dozens more agents were quarantined after as a precaution.

The following month, eight Secret Service agents assigned to Vice President Mike Pence’s detail ahead of his trip to Arizona tested positive for the coronavirus.

Early Friday morning, President Donald Trump announced that he and first lady Melania had tested positive for the virus. 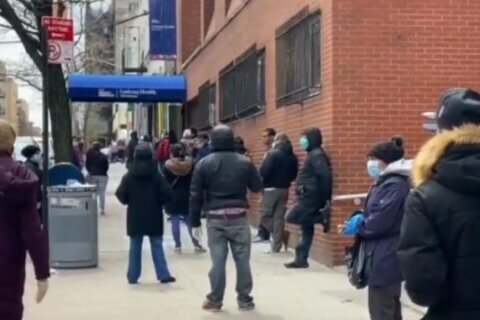 Mom relies on food bank to feed kids amid pandemic