The coronavirus often seemed like a distant phenomenon best viewed on a TV screen in living rooms in the remote mountain towns that dot the state’s expanses of wilderness.

But as another surge of COVID-19 grows across the nation, the global pandemic is hitting home in Doddridge County.

An unexpected jump in virus cases two weeks ago in the north-central West Virginia county upended the lives of its 8,400 residents, temporarily shutting down schools, football games and cross-country meets.

“People said it wasn’t real,” said Victoria Gains, a librarian in the county seat of West Union, which has a population of about 800. “You know it is real when it’s in Doddridge County.”

From the Dakotas to Kansas to West Virginia, rural America is now seeing coronavirus cases rising again. Hundreds of counties with fewer than 10,000 residents have experienced a surge in the past 14 days, according to data from Johns Hopkins University.

Once one of the nation’s coronavirus success stories, West Virginia hit new peaks in its number of daily cases last week. It is recording a 7-day average of about 261 cases daily, a 48% increase from three weeks earlier. Republican Gov. Jim Justice has not ruled out rolling back reopenings as he pushes for expanded testing.

Doddridge was the last county in the state to record a confirmed case in July. Most of its 71 total cases have surfaced this month, which earned it West Virginia’s most severe outbreak designation — bright red on a color-coded map. On Saturday, that designation was eased to the color gold, a category that officials introduced last month to much controversy in order to quickly reopen schools and resume sports activities.

“We were the last in the country for it to affect us,” Gains said inside the town library, which has curtailed events for children. “So I feel like we’re just now seeing what others have gone through.”

The virus has only accelerated the decline of West Union, an out-of-the-way town off U.S. Route 50 about 65 miles from Morgantown. Many say business had already been slow on its main street, where American flags on utility poles sway over quiet sidewalks, surrounded by historic homes and a towering Romanesque county courthouse perched on a hill.

The small businesses that remain open sit among a handful of shuttered storefronts, like Howard Eakle’s 41-year-old Carpet Outlet, which he closed to retire early at 64 when business dried up with the pandemic. Eakle says he now helps out sometimes at a hardware story to earn some pocket money.

“I’ve lived here all my life and I’ve never seen anything like this,” said Debbie Boyce, 60, as she waited outside her car to pick up dinner at Betty Noll’s Restaurant. “I think it’s only going to get worse.”

Some here sniff at other townspeople for not wearing masks more often. A few people with bare faces can be seen sitting on benches outside mom-and-pop shops.

“I don’t think the people are wearing masks like they should. They just aren’t taking it seriously enough,” said Eddie Sponaugle, 79, as he left a pharmacy wearing a face covering promoting President Donald Trump. He said he started to quarantine in March with his wife, only leaving their home to attend drive-in church services and buy essential goods.

Sponaugle, who cast a mail-in ballot for Trump, said he has heard the criticism that the president himself has often not taken virus precautions seriously.

“I noticed that. I guess you could say that’s his privilege, if he wants to go without a mask,” he said.

The virus is now on the minds of many in West Union, even though it is not a major highway stop or urban center.

“It’s hitting everywhere. Doesn’t matter if it’s a small town or a big town,” said Stanley Warner, 69, walking up a hill to his apartment after a grocery run.

Holding up his red-and-black bandanna decorated with skulls, Warner said he doesn’t wear it unless instructed, such as when a bank teller politely told him to mask up. He said he pulled up his bandanna and deadpanned, “Do I look like a bank robber?”

After casting his ballot to reelect Justice, David King walked out of the polling station irritated about the governor’s coronavirus restrictions. He said it was unfair his county couldn’t have high school football games when others have more cases.

Under Justice’s rules, counties are judged by the number of positive cases per 100,000 residents. Doddridge hit the red category when it saw that number go over 25 last week, before going back into the orange category Oct. 19.

“I like Jim Justice, except for his coloring book,” King said, a swipe at the shifting categories. “It’s totally blown out of proportion. We’re so secluded.”

But that’s not the prevailing sentiment in a county that recorded its first death on Sept. 23.

The state ratcheted up free testing as the outbreak grew nationwide. Justice has urged people without symptoms to get tested, aiming to lower the county’s positive rate to allow it to reopen schools and resume sports events.

After parents implored, he made an exception to allow Doddridge County High School’s cross- country team to compete in a regional meet Thursday. The football team, which is undefeated in its first five games, was idled for two weeks.

“We’re No. 1 in everything, and here we are,” Eakle said last week, when the red category was still in effect. “We can’t play now.”

Most in town speculate that the uptick in cases was driven by outsiders, although officials say only county residents are included in the local virus count.

“It’s not our favorite thing,” said James Musgrave, 61, referring to the pandemic as he took a break from mowing his front lawn. “It’s just one of those things you deal with and learn from and go on.” 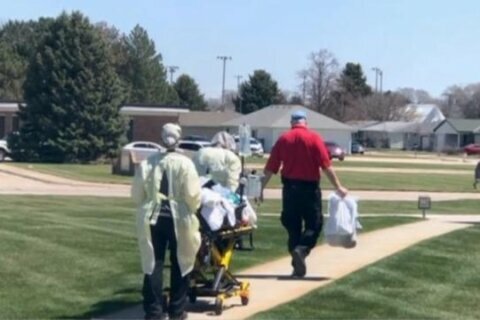 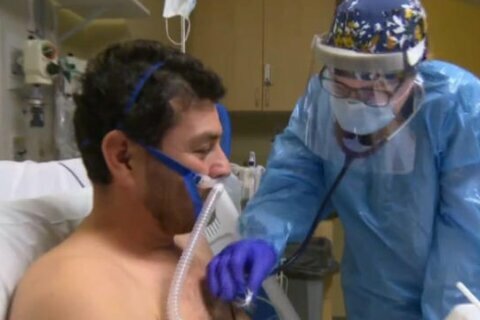