MADRID (AP) — Many residents in Madrid will need a reason to leave their neighborhoods and will face limitations on…
Listen now to WTOP News WTOP.com | Alexa | Google Home | WTOP App | 103.5 FM

MADRID (AP) — Many residents in Madrid will need a reason to leave their neighborhoods and will face limitations on group gatherings even stricter than the ones in place as authorities moved Friday to try to rein in Europe’s fastest-spreading second coronavirus wave.

The long-awaited restrictions affect around 860,000 people, or 13% of the region’s 6.6 million residents, in areas where one of every four new virus infections are being detected, regional chief Isabel Díaz Ayuso announced at a news conference.

The areas are also the poorest, more densely populated, and have a prevalent virus incidence above 1,000 cases per 100,000 for the past 14 days. The same rate for the whole of Europe, including the U.K., stood at 76, according to the European Centre for Disease Prevention and Control, or ECDC.

The Madrid region’s deputy health chief had said earlier this week that the stricter restrictions would be “selective lockdowns,” but Díaz Ayuso said Friday that she wanted to avoid any mandatory stay-at-home orders.

“We need to avoid economic disaster,” she said. “It’s not the time to confine all citizens, but rather to apply measures in areas we have perfectly identified.”

Under the new rules, parks will be closed, shops and restaurants will need to work at 50% of their capacity and residents will need to justify that they are on their way to work, study or see a doctor in order to leave the targeted areas. Nearly 1 million quick antigen tests will also be performed, authorities said.

The Spanish capital’s rate of transmission is more than double the national average, which already leads European contagion charts. On Friday, it reported more than 5,100 new infections for the city and its surrounding area, 200 more than the day before. The region’s hospitals were treating 2,907 people (17% of the total hospital capacity) including nearly 400 in intensive care units, or 41% of those beds.

As yet another sign of how, slowly but steadily, beds are being taken up by COVID-19 patients, a line of green empty tents labelled with red crosses stood empty on Friday at the gates of Madrid’s Gómez Ulla military hospital.

Over 640,000 people have tested positive for the new virus in Spain, more than in any other European country, and at least 30,400 have died since the beginning of the pandemic, according to the Health Ministry’s official data.

In the capital, despite curbs on nightlife, outdoor smoking and limiting all group interaction to a maximum of 10 people — and to six starting from Monday — COVID-19 cases have continued stubbornly on the rise. The incremental measures haven’t prevented the outbreaks from spreading widely, something that experts blame on looser observance of self-protection and, especially, a failure in diligent tracing of contacts of positive cases.

Some experts warned that more action was needed.

“They are overthinking it. Action is needed,” said Daniel López Acuña, who was director of emergencies at the World Health Organization, adding that the measures were “tardy and insufficient.”

Rafael Bengoa, another former WHO official, said that with widespread community transmission, “is possible that very soon a full lockdown will be needed.”

“It seems like we are learning too slow — we haven’t acted energetically enough,” Bengoa told Cadena SER radio.

The center-right coalition government in Madrid has been in turmoil, part internal infighting and part external criticism, as it struggled this week on what to do next. Díaz Ayuso has also been one of the biggest critics of the response to the pandemic by the national government, a left-wing coalition led by Prime Minister Pedro Sánchez.

Her government recovered control to handle the response in late June, once the central government lifted a state of emergency that had reined in a devastating first wave of the virus. But since then, Díaz Ayuso had been complaining that Sánchez’s government wasn’t helping enough.

After weeks exchanging blame for inaction, Sánchez and Díaz Ayuso have agreed to meet Monday with the only goal of “bending the curve,” both governments announced Friday.

Part of the concern is Madrid’s capacity to spread infections to other parts of the country. Home to 3.3 million people in its urban area and as many more in its surrounding region, the city is also Spain’s economic powerhouse. It’s also centrally located at the heart of the Iberian Peninsula, bringing in workers from nearby provinces and visitors from elsewhere.

But so far it’s health centers that are shouldering the worst of the crisis. Famously underfunded for years, primary care doctors and nurses are now also performing thousands of virus tests per day, and have taken the burden of tracing contacts of those who come out as positive.

That’s causing increasingly longer delays in providing test results, leaving people like Raquel López, a 39-year-old sociologist on her 21st week of pregnancy, in self-imposed home isolation for five days as she waited to find out whether she had the virus.

Raquel, who took the test on Monday after finding out that a family she spent time with a week earlier had contracted the virus, was finally told on Friday that she’s negative. For days, nobody picked up the phone at her local health center, she said.

“But it could had been either way,” said López, who works from home. “My husband and I have been responsible and we haven’t gone out while waiting for the results, but what happens with people who can’t afford to miss work? Are they going to wait at home or go out there possibly infecting others?”

López lives in Vallecas, one of the working class neighborhoods where the new restrictions will be imposed from Monday. She’s angry at officials who promote the idea that people in impoverished areas are to blame for not using masks, keeping social distancing or completing quarantines.

“That’s not true. We are doing it the same way as the rest of Madrid,” she said. “The truth is that citizens are behaving much better than politicians.”

‘Not an anomaly’: Montgomery County eyes uptick in coronavirus cases 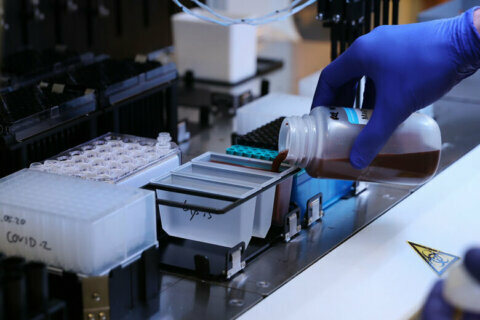