Be the first caller at 855-885-1035 to correctly identify the mystery newsmaker and win a pair of tickets to see Celia and Fidel at Arena Stage. 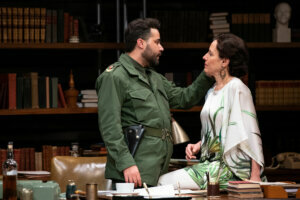 It’s 1980s Cuba and the revolution has reached a crazed tipping point. Fueled by a stagnant economy, 100,000 citizens have fled to the Peruvian Embassy in Cuba seeking asylum. As Fidel Castro grapples between his desire to maintain power and do what is best for his country, he turns to his closest confidant and political partner, Celia Sanchez, for answers. What kind of a leader is he — merciful or mighty? Imbued with magical realism, Eduardo Machado’s Celia and Fidel, Arena Stage’s seventh Power Play, imagines a fight between Cuba’s most influential female revolutionary and its most notorious political leader.