Test your newsmaker knowledge this Saturday and Sunday morning in the 8 a.m. hour with the WTOP Mystery Newsmaker Contest. 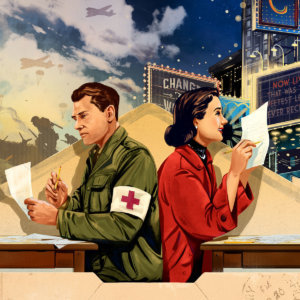 Be the first caller at 855-885-1035 to call and identify the Mystery Newsmaker and you could win a pair of tickets to see Ken Ludwig’s Dear Jack, Dear Louise at Arena Stage.

When two strangers meet by letter during World War II, a love story begins. U.S. Army Captain Jack Ludwig, a military doctor stationed in Oregon, begins writing to Louise Rabiner, an aspiring actress and dancer in New York City, hoping to meet her someday if the war will allow. But as the war continues, it threatens to end their relationship before it even starts. Tony Award-winning playwright Ken Ludwig (Baskerville: A Sherlock Holmes Mystery, Lend Me a Tenor) tells the joyous, heart-warming story of his parents’ courtship during World War II and the results are anything but expected.

Dear Jack, Dear Louise is generously sponsored by the Guttman-McCabe family in honor of Fred and Ilse Ruben;