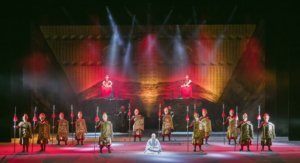 Enter to win a family four pack of ticket’s to see the China Performing Arts Agency’s performance of  Xuanzang’s Pilgrimage.

Xuanzang’s Pilgrimage is China’s first traditional concert drama performed by the China National Traditional Orchestra (CNTO). It tells the story of the Buddhist monk Xuanzang (602-664) who travelled the length of the Silk Road across China on a pilgrimage to India. Xuanzang documented his experiences of the differences within Buddhism that he encountered along the way. His 17-year journey was driven by his desire to discover religious texts that had not yet come from India to China. The story is brought to life with an 80-piece traditional Chinese orchestra, 24 performers, and elaborate costumes.

The production showcases the diverse yet connected cultures found along the legendary Silk Road, combining music from China’s Han, Uyghur, Kazak, Tajik, and other ethnic groups, and features exotic instruments such as the zither, Chinese harp, dulcimer, and eagle flute. Combining elements of Chinese and Indian heritage to tell this international story, Xuanzang’s Pilgrimage is a large-scale multimedia experience from one of China’s most notable cultural organizations. Live musicians, striking, colorful design, and an epic story combine to make this an unforgettable event for audience members.

Enter to win now through January 7