At least a dozen of the playoff drivers had some sort of problem with NASCAR’s new Next Gen car at Bristol, where the spec car that has leveled the playing field was exposed for myriad durability issues that have followed it in its entire debut season.
Listen now to WTOP News WTOP.com | Alexa | Google Home | WTOP App | 103.5 FM
(1/2) 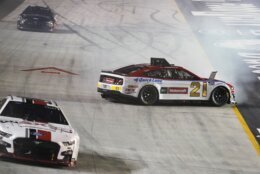 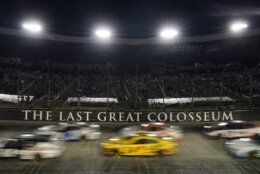 Kyle Busch deserved better than two failed Toyota engines in the first round of NASCAR’s playoffs.

But at least Busch knows what happened to end his night at Bristol Motor Speedway and leave him “flabbergasted” at being eliminated from the playoff field.

Martin Truex Jr.? He could only laugh as he stood in the garage alongside his disabled car as fellow Toyota driver Bubba Wallace came in for repairs.

“There’s another one,” he said with a smirk. Truex also referred back to Kevin Harvick’s words after his car caught fire in the opening playoff race at Darlington three weeks ago.

“What Harvick say?” Truex said of his own Saturday night issue. “Crappy parts.”

At least a dozen of the playoff drivers had some sort of problem with NASCAR’s new Next Gen car at Bristol, where the spec car that has leveled the playing field was exposed for myriad durability issues that have followed it in its entire debut season.

The Ford camp suffered a rash of blown tires, Toyota was plagued by power steering failures, drivers racing for the win were knocked from contention for any number of mechanical gremlins and passing was a most difficult task.

The 12 lead changes were the lowest in more than a dozen years at Bristol, and only four of those passes were under green.

“Just difficult to pass,” Harvick said. “The car is way too fast through the corners. Can’t race.”

Harvick was in position to contend for the victory until a wheel fell off his Ford during the final round of pit stops and knocked him from the playoffs.

Now there’s a new round of questions surrounding the Next Gen, an industry-wide project to develop a car of single-source parts that both contained costs and helped small teams close the gap on the powerhouse NASCAR organizations. It’s worked, as Chris Buescher on Saturday night became the record-tying 19th different Cup winner this season.

Buescher’s win marked the first time since this version of NASCAR’s playoffs were established that drivers not competing for the title swept the entire round. Erik Jones won at Darlington and Wallace at Kansas; neither is a playoff driver, nor is Buescher, who scored his second career victory in his 250th career start.

But Buescher won by stretching his final two-tire pit stop the last 61 laps of the 500-mile race, as a lack of tire wear (except for that rash of blown right fronts on the Fords) kept runner-up Chase Elliott on four new tires comfortably in his rearview mirror.

The Next Gen has been questioned over safety concerns since rumors of disastrous crash tests during the development phase, and those issues have only ratcheted since July when a crash in qualifying gave Kurt Busch a concussion that has kept him out of competition for nearly two months. Other drivers have reported they are feeling the force of impact during crashes far worse than ever before, and a spate of fires at Darlington led NASCAR to make a series of rules changes.

“We need NextGen 2.0. Just gotta figure out who’s gonna pay for it,” Denny Hamlin tweeted. Hamlin is part-owner of the 23XI Racing team that has been without Kurt Busch for nine races.

“Passing was just impossible,” Hamlin said after the race. He, too, had a blown tire at Bristol but felt the difficulty in passing was the larger problem.

“I would like to see the racing improve overall. Some lap time variation a little bit. We’re just running around there and it’s like we’re running faster in the corners than we are on the straightaways,” Hamlin said. “We had some steering issues, and it looks like our Toyota teammates also had steering issues.”

Yes, all six Toyotas had a problem, ranging from tires for Hamlin and Christopher Bell, steering issues for Truex, Wallace and Ty Gibbs, and Kyle Busch’s engine failure.

And it was a mixed night for Brad Keselowski, who won the first stage of the race for his first stage victory of the season and seemed in position to race for his first win of the season. Keselowski moved from Team Penske to RFK Racing this season to drive with an ownership stake in Jack Roush’s team, and he desperately wanted to give RFK its first win.

But then his tire blew while leading with 87 laps remaining and Keselowski’s trip to victory lane was to congratulate teammate Buescher. He acknowledged passing was tricky — but said it isn’t supposed to be easy — and said NASCAR must continue to work on the Next Gen.

“There’s the ‘everything is wrong with this car’ camp and there’s the ‘nothing is wrong with this car’ camp,” Keselowski added. “I’d like to keep working on it. It seems like much, like many things today, that polarization means there’s no room for middle ground. In my eyes, I’d like to see some small tweaks, but I’m thankful and proud of our sport and where the Next Gen car has taken us so far.” 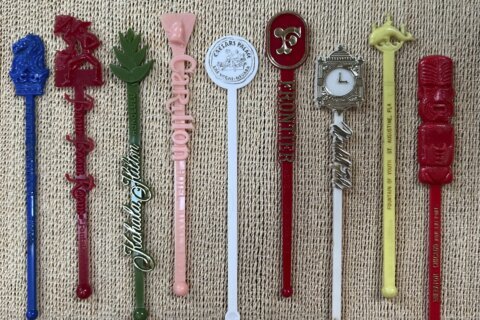