Friends and associates of slain rapper Young Dolph handed out Thanksgiving turkeys at a neighborhood church Friday in Memphis, Tennessee, two days after he was gunned down in broad daylight inside his favorite bakery.
Listen now to WTOP News WTOP.com | Alexa | Google Home | WTOP App | 103.5 FM
(1/5) 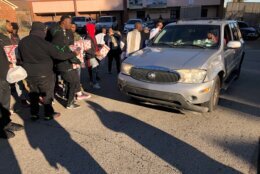 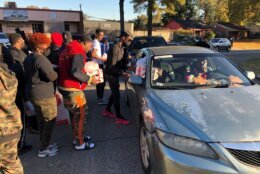 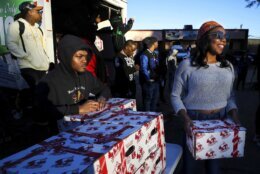 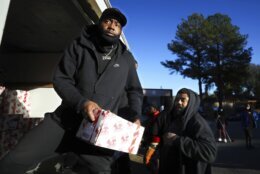 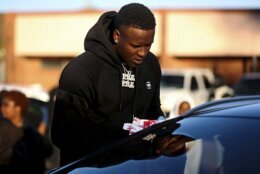 MEMPHIS, Tenn. (AP) — Friends and associates of slain rapper Young Dolph handed out Thanksgiving turkeys at a neighborhood church Friday in Memphis, Tennessee, two days after he was gunned down in broad daylight inside his favorite bakery.

Known for acts of charity in his hometown, the hip-hop artist and label owner had helped organize the event at St. James Missionary Baptist Church and was going to participate before he was fatally shot Wednesday.

Undaunted, members of his music label, Paper Route Empire, along with church volunteers and community activists, distributed dozens of turkeys, stuffing mix and cranberry sauce — and said “happy Thanksgiving” — to people driving past the church.

It was the type of event Young Dolph, who grew up in the Castalia neighborhood where the church is located, has been organizing for years, often without the reporters and cameras present Friday. Before the event, volunteers spoke quietly among themselves or sat in solemn reflection as his music played outside the church on the sunny afternoon.

“When I hear his music, I just break down,” said Jones, who spoke with a reporter while sitting on the rear bumper of a U-Haul truck full of 300 turkeys. “The truth in all of it, and where he came from, that’s what really gets to me sometimes. This is what he would want us to do right here, still keep on giving. He came from nothing, but he wanted to make sure everybody got some.”

Police on Friday kept searching for suspects in the killing, which shook Memphis and shocked the entertainment world. Police have released photos taken from surveillance video that shows two men exiting a white Mercedes and shooting Young Dolph before fleeing.

The killing of Young Dolph, 36, whose real name was Adolph Thornton Jr., intensified cries against violence in the Memphis area, which has seen high-profile shootings at a K-8 school, a post office and a grocery store in the past two months.

This year, 255 killings have been committed in the city of Memphis, already surpassing the 244 slayings last year, the Memphis Police Department reported. That’s in addition to thousands of gun-related incidents reported through this past September.

“The key to addressing the endless cycle of shootings and retaliatory shootings in our community is to heal the generational trauma that makes violence appear to be the only solution to conflict,” Taylor said.

Some community leaders have expressed frustration that so many attempts to address gun-related crime — community meetings, efforts to add police officers, increased crime prevention funding, days of remembrance for murder victims, working with former gang members to intervene in disputes — have not worked.

Van Turner, president of the local NAACP branch and a father of two, said he talked with his boys about the shooting. Turner plans to host a forum next week to discuss strategies to curb gun violence.

The Rev. Jason Lawrence Turner, senior pastor of the historic Mississippi Boulevard Christian Church, has been working on addressing gun crime and mentoring young people in Memphis. He said it’s time for a “course correction.”

“It’s going to take a collaboration of government agencies, certainly churches, and the citizenry, to do our part to divert these instances of violence,” the pastor said. “And, as well, to instill a greater responsibility in the community so that, when there are instances like this, it’s not the responsibility for those in the community to take justice into their own hands.”

His church, which is celebrating its 100th anniversary this year, has established mentoring programs for girls and boys in middle school and high school. The church also has adopted three schools to provide an avenue for children to talk about their problems and deal with bullying and other threats.

“It’s not all on law enforcement,” Turner said. “Law enforcement shows up after a crime has been committed. We have a responsibility to keep these crimes from being committed.”

She fondly remembers playing with him and his sisters in the neighborhood where their grandparents lived, near St. James church. He liked to play basketball and he was a relatively quiet child, Crawford said.

As she grieves, Crawford also remains frustrated at the lack of progress in the fight against gun violence. 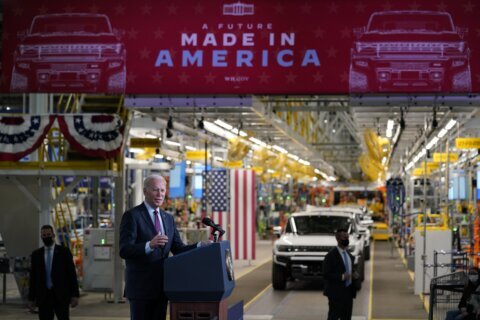