ATLANTIC CITY, N.J. (AP) — The nation’s commercial casinos won nearly $14 billion in the third quarter of this year, marking the industry’s best quarter ever, and pushing U.S. casino revenue past what it was for all of 2020, according to figures released Tuesday.

The figures from the American Gaming Association, the casino industry’s national trade group, show U.S. casinos are poised to have their best year ever in 2021 as more consumers feel comfortable visiting casinos amid the COVID19 pandemic, and as online and sports betting revenues continue to grow.

Bill Miller, the association’s president and CEO, noted that the second quarter of this year also broke records.

“Two straight quarters of record gaming revenue is an incredible accomplishment in any context, let alone after the most challenging year in industry history,” he said in a statement. “Our recovery is not a flash in the pan, but rather a sustained result of our leadership in responsible reopening, world-class entertainment offerings and widespread favorability.”

“After a year of restrictions and quarantines, people were anxious to get out and enjoy in-person experiences again,” she said. “The casino industry responded quickly to implement clean and safe protocols providing a welcoming environment to people seeking safe social activities.

“The explosive growth of internet gaming during the pandemic engaged a new audience of consumers who may have become curious about brick-and-mortar casinos and the in-person gaming experience,” she added. “Encouraged by casino marketing and loyalty programs they may have decided to try something new.”

David Schwartz, a gambling historian at the University of Nevada Las Vegas, agreed that eagerness to get out and do things among gamblers who had been reluctant to visit casinos in Las Vegas or in their local regions is one factor driving the higher numbers.

The association said the record was driven, in part, by the steady return of tourism, with 9.2 million people visiting Las Vegas in the third quarter, a nearly 10% increase over the second quarter of this year, and the highest quarterly visitation level since the outbreak of the pandemic in early 2020.

Slots and table games, traditionally the bread and butter of the casino industry, accounted for most of the haul at over $12 billion.

Sports betting revenue, however, saw a quarterly low for 2021 of $886.5 million due to a limited end-of-summer sports calendar.

Combined sports betting and internet gambling revenue through the first nine months of the year was $5.36 billion, up more than 200% year over year. 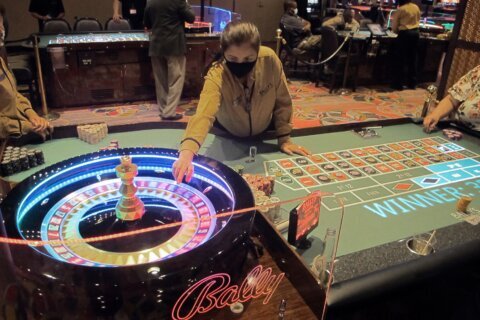