NEW YORK (AP) — Even in a July jobs report that was nearly universally hailed as a good one, pockets of weakness and concern are still clouding the celebration.

The numbers in the report were certainly strong, with employers adding 943,000 more jobs to their payrolls than they cut, a better hiring performance than economists expected. The unemployment rate also dropped in another encouraging sign, down by half a percentage point from June to 5.4%. And many economists expect further improvements.

The unemployment rate fell for many groups across the country, but not for all the right reasons. Among Black workers, for example, the decline may have been entirely due to people dropping out of the workforce, rather than from more people getting jobs.

There’s also growing concern that the broad strength found in July jobs report may prove fleeting. The faster-spreading delta variant of the coronavirus is causing people to mask up and feel more anxious again, threatening the improvements.

“This is a good jobs report, but the delta variant is casting a significant shadow over the outlook at this time,” said Russell Price, chief economist at Ameriprise.

Here are five takeaways from the July jobs report:

The strong numbers in Friday’s report come from surveys done during the second week of July. That means they don’t fully reflect the ramp-up in worries about the delta variant. It wasn’t until July 27 that the Centers for Disease Control changed its guidelines for masks, for example. It asked all Americans in areas of high or substantial transmission to wear masks again indoors, even if they’re vaccinated.

If case counts continue to worsen, customers could shy away from returning to stores, restaurants and other businesses. That could hit the number of jobs being offered. Worsening trends could also discourage potential workers from filling those job openings.

Beth Ann Bovino, chief U.S. economist at S&P Global Ratings, pointed to a recent report from LinkedIn that said hiring was 5.8% lower than in June. The report looks at how many users add new employers to their profiles throughout the month, and Bovino said it may be reflecting some of the delta effect that the government’s jobs report may have missed.

WIDESPREAD, BUT NOT UNIFORM, GAINS

But the improvement for Black workers didn’t come because many more of them got jobs. Employment numbers for the group were nearly unchanged from June. Instead, much of it was due to Black people dropping out of the workforce. Last month, 60.8% of all Black Americans were in the labor force, down from 61.6% in June.

Ameriprise’s Price said he was puzzled by the diverging trends and couldn’t immediately think of an explanation.

LESS SUPPORT FROM THE FED?

Even with the pockets of concern, July’s jobs report was strong enough that investors saw it as another sign that the time may be nearing for the Federal Reserve to pare back its support for the economy.

The Fed has been keeping short-term interest rates at a record low of nearly zero to juice the economy after it fell into its coronavirus-caused recession. The central bank has also been buying $120 billion in bonds every month to help keep longer-term rates low. The moves have made it cheaper to borrow money, and prices across the housing and stock markets have jumped as a result.

With July’s strong jobs numbers, investors are preparing for the Federal Reserve to say in upcoming months that it will slow its bond purchases. That would be the first step before it raises interest rates. Such expectations helped send the yield on the 10-year Treasury up to 1.28% from 1.21% late Thursday. That’s a significant move for the bond market.

BOUNCEBACK, BUT NOT FULL RECOVERY

Some of the strongest gains in jobs last month came from the areas that were hardest hit by the pandemic: the leisure and hospitality industries.

They accounted for 40% of the nation’s job growth last month, with particularly strong gains for food services and drinking places as people streamed back into restaurants and bars.

Even with the gains, though, the number of jobs in the leisure and hospitality industries remain 10% below where they were in February 2020, before the pandemic crashed the economy.

Higher pay is also helping to attract workers to the industries, which tend to have some of the lowest-paying jobs. Leisure and hospitality workers made an average of $18.55 per hour last month, according to preliminary figures. That’s up 0.9% from June. Among all private-sector workers, average hourly earnings rose 0.4% to $30.54.

Not only were more people working last month, more were at work as well.

The numbers count everyone who worked from home at some point in the last four weeks specifically because of the pandemic. Asian American workers were the most likely to be among them, at 30.1% of their total workers. That compares with 12.3% for white workers, 10.8% for Black workers and 8% for Latino workers.

Of course, the delta variant may be upending things here as well. Several big employers have already pushed back their return-to-office dates because of worries about the delta variant. Amazon pushed its date for tech and corporate workers to January from September, for example. 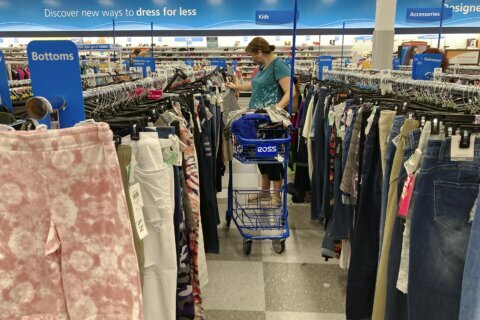 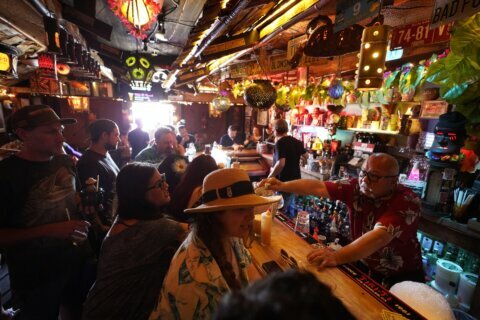