Walgreens earnings surged past Wall Street expectations for the fiscal third quarter, as the drugstore chain continued to rebuild sales hurt by the COVID-19 pandemic.

Millions of vaccinations and tests helped pharmacy sales rebound, and an easing of pandemic restrictions in the United Kingdom brought some customers back to the company’s Boots stores.

Overall, the company earned $1.2 billion in the quarter that ended May 31. That compares to a $1.7 million loss in last year’s quarter, when Walgreens booked $2 billion in pandemic-related charges.

Total sales climbed 12% to more than $34 billion in the most recent quarter, and adjusted earnings amounted to $1.51 per share.

Analysts expected, on average, earnings of $1.16 per share on $33.49 billion in revenue, according to FactSet.

Deerfield, Illinois-based Walgreens Boots Alliance Inc. runs more than 13,000 stores mainly in the United States and the United Kingdom. It also has a presence in China through an investment in a company that owns and operates several thousand stores there.

Drugstores are Walgreens’ main focus, but the company also is expanding into care delivery through a partnership with VillageMD.

U.S. sales at Walgreens established stores climbed more than 6% in the recently completed quarter. That included a jump in pharmacy sales, helped by more than 17 million COVID-19 vaccinations.

Company officials told analysts Thursday that customers are returning to their stores, and they are seeing an increase in sales of profitable beauty products.

Sales in the U.K. were still lower than pre-pandemic levels in the quarter. But Executive Vice President James Kehoe said the company was rapidly regaining market share lost to grocers at the height of the pandemic.

That implies a conservative outlook for the fiscal fourth quarter, Jefferies analyst Brian Tanquilut said in a research note.

But the analyst also said the picture gets cloudy in the long term due to challenging prescription reimbursements and uncertainty about how profitable things like Walgreen’s push into care delivery will be.

Shares of Walgreens, a component of the Dow Jones Industrial Average, fell nearly 7% to $49.03 in morning trading while the Dow rose slightly. 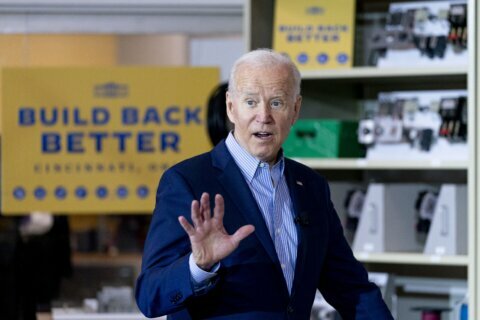