Powerball and Mega Millions jackpots grow to combined $1.39B

DES MOINES, Iowa (AP) — With the widest reach of any lotteries in the U.S., Powerball and Mega Millions are designed to produce eyepopping jackpots that generate huge sales. It’s safe to say it’s working, as their combined jackpots reached an estimated $1.39 billion on Thursday.

The next Mega Millions drawing is Friday night, when an estimated $750 million prize will be up for grabs. The drawing for an estimated $640 million Powerball jackpot will be Saturday night.

Only if you expect to lose. Your odds of winning either jackpot is exceedingly small, at 1 in 292.2 million for Powerball and 1 in 302.5 million for Mega Millions. The odds of winning smaller prizes are much better, but it’s still unlikely you’ll win back the money you spend on a ticket.

PUTTING THE ODDS IN PERSPECTIVE

Can’t envision your odds of winning? Here’s how Andrew Swift, a mathematics professor at the University of Nebraska-Omaha, described it: The odds of winning Powerball are a little worse than flipping a coin and getting heads 28 straight times.

BUT SOMEONE WILL EVENTUALLY WIN

That’s the thing. Despite the infinitesimally small odds, one day soon some guy in Florida or woman in Arizona or who knows where will stand before cameras with a dazed smile, holding up a giant check with a bunch of zeros. It’s a big country, and when millions and millions of people play the lottery, someone eventually wins.

DO THE ODDS CHANGE AS THE JACKPOT GROWS?

The odds stay the same for any single combination purchased, but a person’s odds of winning improve ever so slightly with every different combination they play. Keep in mind, though, that whether you spend $2 or $200 on tickets, you should plan on losing. As more people play, the odds also rise that more than one person will draw the winning numbers, which would mean sharing the jackpot.

WHEN I BEAT THE ODDS, HOW RICH WILL I BE?

Pretty rich, but maybe less than you think. First, those jackpots promoted by the lotteries are for winners who take the annuity option, which is paid out over 30 years. Of course, winners rarely go that route, instead opting for a lump-sum payment figuring they can better invest it themselves. That means if one person wins the estimated $750 million Mega Millions jackpot, they would get a pre-tax lump-sum payment of about $550 million, which is around 25% less than the annuity amount.

THAT’S STILL A BUNDLE OF MONEY

It absolutely is, but you’ll take home even less because the federal government will also be a winner, typically siphoning off 37% in taxes. Most states tax lottery winnings, too.

WHY THE DROUGHT IN BIG JACKPOTS?

It’s been nearly two years since lottery jackpots grew so large. Some of that is chance, as players won prizes before they could reach the stratosphere. But the smaller prizes also reflect slower sales during the coronavirus pandemic, which led lottery officials to reduce the size of initial jackpots and allow them to grow more slowly, depending on sales.

HOW LONG WILL THIS GO?

There’s no telling, but keep in mind that the two largest jackpots ever each exceeded $1.5 billion, so it could be a while before some lucky player is bathing in riches. 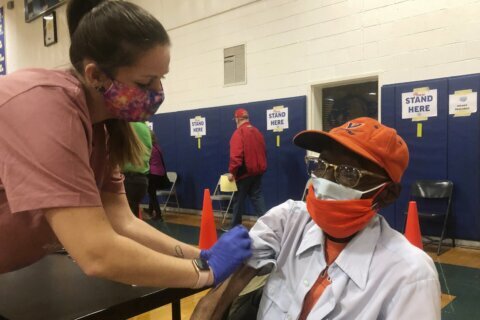