SANTA MONICA, Calif. (AP) — By most measures of what keeps a pub afloat, the coronavirus pandemic should already have Ye Olde King’s Head on its last kegs.

The British restaurant and bar in seaside Southern California has been battered the past nine months. It was in the process of adapting to new restrictions that took effect Friday that would further crimp its recovery even as the prospect of a stay-home order loomed that could cripple the business.

“It’s not worth thinking about,” said operations manager Lisa Powers, who has guided the 46-year-old institution through an ever-changing set of public health orders. “Nobody’s going to survive without help from the federal government if there’s another lockdown.”

The surge of cases in Los Angeles County is exploding at a rate even local public health officials didn’t seem to contemplate on Tuesday, when they gave businesses three days to adopt new restrictions that force restaurants to halve the outdoor capacity many established to stay afloat because indoor service was banned. Restaurants and nonessential retail must close at 10 p.m.

On Wednesday, LA County Public Health Director Barbara Ferrer said that by early December the county of 10 million people could reach a daily average of 4,000 cases that would require restaurants to only offer takeout meals. She said she didn’t think that outcome was inevitable.

The next day, as daily cases topped 5,000, county health officer Dr. Muntu Davis said by Sunday the county could surpass a daily average of 4,500 cases that would trigger a shutdown.

The latest surge comes as public health officials across the U.S. raise the alarm about out-of-control transmission of the virus, strengthen restrictions and urge people against holding large Thanksgiving gatherings.

Gov. Gavin Newsom placed most California businesses under the most severe restrictions on Monday and on Thursday added a 10 p.m. to 5 a.m. curfew for residents that takes effect Saturday.

Restrictions went further in Los Angeles County, which accounts for a quarter of the state’s 40 million residents but has about a third of the coronavirus cases and close to 40% of the deaths.

Ye Olde King’s Head, a mock Tudor fixture near the beach in Santa Monica, weathered a lengthy shutdown in the spring, a destructive ransacking during police protests in May and public health orders that have required constant adaptation.

“It’s like every week there’s a different rule to follow,” Powers said as she readied the establishment for the latest rules that includes changing closing time from 2 a.m. to 10 p.m. “We’re trying to keep up but things happen so fast.”

The California Restaurant Association has said thousands of restaurants have closed statewide and it fears more than a third of restaurants open in March before the first shutdown order will eventually go out of business.

The King’s Head had to offer its traditional British fare — everything from bangers and mash and fish and chips to traditional Sunday roast — for takeout. Its adjoining gift “shoppe” offering imported tea, biscuits, Marmite spread and British newspapers has also reopened.

It continued to rebuild after vandals and looters trashed the place during protests following the death of George Floyd in Minneapolis. The ATM was dragged into the street, smashed open and the cash pocketed. Booze was stolen, televisions were smashed and graffiti was sprayed on the window blinds.

“They didn’t even know what they were looting,” Powers said. “It was English tea and English chocolates.”

When only outdoor dining was allowed, the King’s Head was fortunate to be a business that already had patio seating, allowing it to begin serving pints with pub grub along with formal afternoon tea on fine china and white linen with fresh baked scones, sausage rolls and mini sandwiches.

For the largely British ex-pat community, as well as loyal locals and tourists from all over, the reopening was welcome.

“It’s as close to being back home as you can get,” said Philip Mathur, who has been frequenting the pub since he moved to LA from a small town outside Glasgow more than 20 years ago. “It brings a bit of sanity into another otherwise strange world we’re living in right now.”

Mathur, who drank a Heineken and planned to order steak pie and chips once his three British friends arrived, said it would be “a sad loss” if the pub had to close again.

It should have been a big year for any bar in Los Angeles. The Dodgers won their first World Series in more than three decades and the Lakers won their first NBA Championship in 10 years. The pub also draws crowds for English soccer and rugby matches that they had to show to limited crowds on the patio.

The pub itself is mostly quiet. No one is throwing darts, standing at the dark wooden bar where 20 beers are on tap, eating in the formal dining room or sitting by the fireplace with a painting of Winston Churchill above it.

Powers is working on plans to add awnings and heaters to prepare for outdoor seating in the cooler, damper months in the otherwise temperate climate.

She declined to discuss how much sales have declined. The business made it through the shutdown with help from a Paycheck Protection Program loan ranging between $350,000 and $1 million, according to the Small Business Administration.

Powers, who is from Birmingham, England, didn’t want to contemplate another possible shutdown. She acknowledged the latest virus numbers didn’t look good but maintained a stiff upper lip.

“It’s certainly testing us,” she said. “I think we’ve got the good old British grit.” 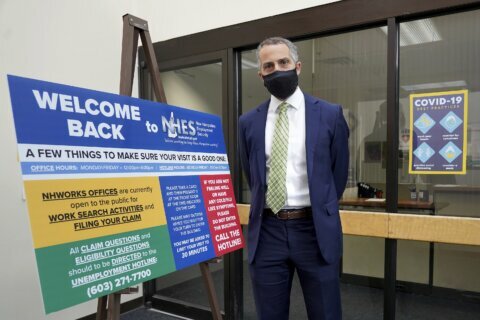 US unemployment claims drop to 473,000, a new pandemic low 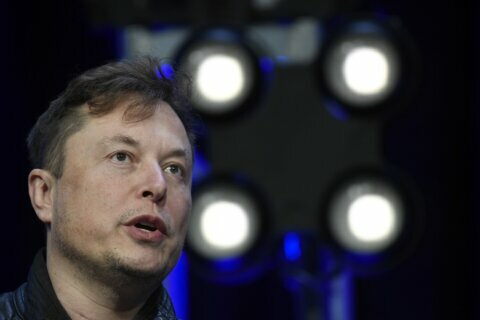