With Americans anxious to go out, walking tours pick up pace

CINCINNATI (AP) — With an eerily quiet and empty stadium plaza behind him, the tour guide tried to help people picture what they would have seen there more than 160 years earlier.

His audience of eight, all on foot, peered over masks at maps as he described hundreds of groceries, saloons, blacksmiths and 100,000 people living across two square miles — one of the pre-Civil War United States’ most congested areas. The area had an open secret then: It was filled with stations on the Underground Railroad for slaves trying to reach freedom. Today, they were walking those paths.

For so many Americans, this is a time of being cooped up, of being unable to interact with fellow humans and, in many cases, with the landscape itself. COVID-19 and its impact — more than 200,000 Americans dead — have kept many away from air travel, cruise ships and crowded beaches.

Enter a decidedly unplugged alternative, a very concrete antidote to a suddenly more virtual life: the walking tour. Maybe not the most exciting outlet, but far better than being surrounded by the same four walls.

“Our mental health matters also, and it’s very important for us … when we’re really feeling extremely alienated from each other and feeling trapped in our homes, to walk our streets, in the safest way possible,” said Rebecca Manski of Social Justice Tours in New York City.

Such tours have picked up in popularity for people seeking outdoor social activity while maintaining health safety precautions and staying in small groups. The Cincinnati walking tour, for example, was among several offered in recent months by the Cincinnati Reds Hall of Fame & Museum. The goal: to offset a pandemic-abbreviated baseball season that didn’t allow fans in the ballpark.

Normally, Bob Doherty, 61, said, his family would have been inside the stadium that Sunday afternoon, rooting for the Reds in their playoff-race game against the Chicago White Sox. The tour, which combined the roots of professional baseball and the city’s abolitionist history, “is the next best thing,” he said. Others concurred.

“It’s refreshing to get outside and be with family,” said Mack Doherty, 28. They were in a group of five including his father, his sister and her boyfriend. His girlfriend, Avery Helwig, 28, concurred: “So nice to get out.”

Manski’s New York group, like many tour companies, halted in-person tours as the pandemic took hold in March. She said the jarring sound of ambulance sirens as new COVID-19 victims were rushed to hospitals added to the obstacles of education-focused tours. Hers shifted quickly to virtual offerings, and other groups have been offering small, private group tours or self-guided tours with audio and GPS information provided.

“It’s an interesting time to be in the travel industry,” said Riley Pearce, of Berkeley, California-based Backroads Tours. “Nobody knows what people are going to want, because people don’t really don’t know what they want yet.”

With pandemic worry reducing participants on Backroads’ walking, hiking and bike tours by as much as 90% this year, they are rebuilding business with family- and private-group expeditions with a variety of approaches.

The Reds Hall of Fame Museum, in the city that pioneered professional baseball in 1869, has also done walking tours about the 1919 “Black Sox” World Series betting scandal and about the former Riverfront Stadium that hosted the “Big Red Machine” teams of the 1970s. For fall, it’s launched “Brunch, Brews and Baseball” that includes a brewery tour.

But executive director Rick Walls said the nonprofit museum hasn’t been able to conduct popular ballpark tours or reap the visits and merchandise purchases by fans coming to games in the adjacent stadium.

“It’s been a pretty big hit,” Walls said. The museum couldn’t host its popular ballpark tours this summer, although they are resuming now that the Reds’ season has ended.

The museum has replaced in-person autograph sessions and discussions for its 5,000-strong membership base with Zoom calls with former Reds stars Walls said have “really stepped up” to help with free or discounted autographing of items for the museum to sell. Like other visitor-dependent businesses, the museum is hoping for a normal 2021, but making contingency plans in case the pandemic continues.

“We will be better coming out of this,” Walls said. “We’ll have created some new ways we operate internally and ultimately, we’ll have a successful season.”

Pearce said his company believes there is a lot of pent-up demand for visiting places such as Grand Teton National Park because they remind people that while “modern life seems totally overwhelmed by COVID,” there are still spectacular sites, some thousands of years old, that have been untouched by the pandemic.

So while the walking tours are in small groups for now, they could well become very big when the world comes back.

“I think that’s the same thing that a lot of people are craving right now,” Pearce said. “When everything else feels totally upside down, going into nature and going for a hike, sleeping under the stars; it’s all a reminder that there is just this incredible world out there to explore. And it’s going to be waiting for us, as soon we’re ready.” 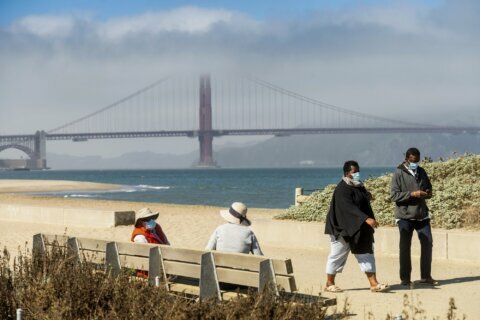