California's Sleep Train Arena was set up to treat coronavirus patients, but it only treated a few. Now the state is using the lessons learned there to run other sites more efficiently.
Listen now to WTOP News WTOP.com | Alexa | Google Home | WTOP App | 103.5 FM
(1/3) 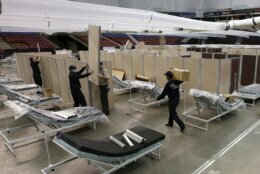 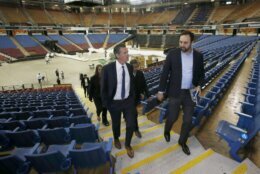 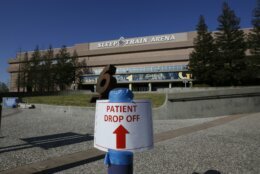 SACRAMENTO, Calif. (AP) — Doctors arrived at an arena-turned-medical center in Sacramento in mid-April and were told to prepare for 30 to 60 coronavirus patients to arrive within days. They spent the weekend working feverishly to get ready.

State officials envisioned the cavernous Sleep Train Arena and an adjoining facility as a place where hundreds of patients could be treated, but in the first week just one arrived. The pace never increased, and the 250 assembled medical workers — physicians, nurses, pharmacists and administrative staff — found themselves wondering what to do.

“People began to question within themselves whether they were really needed or not,” said Dr. Charles Moore, a retired internal medicine physician who worked there for about six weeks. “There were no plans for what would happen if you gave a party and no one came.”

Ultimately, just nine patients arrived over 10 weeks. The cost to care for them was a staggering $12 million.

The Sacramento site was one of 15 temporary medical facilities set up around California in anticipation of a surge of cases that never materialized. It shut down on July 1, as did most others.

But as virus cases started rising again around California in June, the state decided to keep some open and take lessons from Sleep Train to run them more efficiently.

Kim Brown Sims, the arena’s chief nursing office, wrote a training manual the state could use across its facilities. She also recommended the state either create its own electronic record system to use at every site or partner with local hospitals to use their systems, rather than requiring facilities to create their own paper systems, something the doctors had been asked to do that first weekend at Sleep Train.

“Many places just went very fast because they were scared and they had the ability to do it so they did it, not really thinking about how they were going to make all the pieces fit together and integrate with the existing health care system and deliver efficient care,” he said.

Moving forward, he said when deciding whether to open alternate care sites California officials should use regional infection rates and hospitalizations to set staffing so the sites don’t have too many doctors and not enough patients.

Brian Ferguson, a spokesman for the state Office of Emergency Services, acknowledged the state didn’t use local data when fist setting up field sites.

“I think in hindsight we would certainly make sure that we would do some things similar again, but perhaps be more thoughtful about how fast we ramp up or have more off ramps,” he said.

However, Ferguson said the state benefits from having staff who have been trained to work at such facilities and established procedures for running the sites.

“Having those folks trained, having these sites available will continue to be a value,” he said.

Sleep Train Arena was the site of an April 6 news conference by Gov. Gavin Newsom, who hailed the facility as a prime example of California’s rapid preparedness. It and a nearby building, both owned by the NBA’s Sacramento Kings, would house 400 beds and take people discharged from hospitals or be the first stop for people with mild to moderate virus symptoms, he said.

Newsom didn’t mention the state was paying the Kings to rent and provide services, a cost of $1 million over two months. The state spent another $7 million on mechanical, electrical, plumbing and other improvements, according to the Department of General Services.

The state also spent at least $2.8 million on staff, nearly $500,000 on personal protective equipment and about $1 million on other expenses.

The California Health Corps, a volunteer initiative started by Newsom, provided 199 workers at a cost of about $563,000. The state spent another $428,000 on just five pharmacists and five pharmacy technicians under a contract with Aya Healthcare, a San Diego-based travel nursing company.

Their payment included housing, benefits and per diem allowances, said Rodger Butler, a spokesman for the California Health and Human Services Agency.

Chief executive, nursing and medical officers were hired alongside dozens of other workers through a $1 million contract with Medefis, a vendor management company. A contract with Cardinal Health Pharmacy Solutions provided two more workers.

After an opening week that saw one patient, five came from a nursing home that didn’t want COVID-positive patients. While all of the patients were older, none was extremely sick or in need of round-the-clock care, said Moore, a Health Corps member.

Still, that’s what they got, with one doctor visiting each patient every shift, Moore said.

At one point, doctors brainstormed on whether they could be doing some type of public outreach to let people know the facility existed.

Randal Christensen, a doctor from Nevada who set up mobile health clinics during Hurricane Katrina, served as chief medical officer. He said he expected the mission of the facility would be fluid, given the circumstances.

“I believe that what we did, while not a huge number, was very much needed at that time and place,” he said.

Sims, the chief nursing officer, took a similar view. She was charged with training workers, including nurses fresh out of school and EMTs who didn’t work in hospital settings. Some of the EMTs she trained are now caring for patients at San Quentin State Prison, the site of a major outbreak, she said.

“In health care you plan for the worst-case scenario, and anything that happens better than that you say, ‘Hallelujah,’ ” Sims said.