Apps help volunteers get excess food to the hungry

Food waste and hunger are two enormous problems that some non-profit groups say can be addressed together by getting the…
Listen now to WTOP News WTOP.com | Alexa | Google Home | WTOP App | 103.5 FM

Food waste and hunger are two enormous problems that some non-profit groups say can be addressed together by getting the extra food to the people who need it.

New apps are making that easier.

The USDA estimates that more than 30% of the food in America is wasted each year. Besides food waste at home, there is also a lot of commercial food waste: restaurants preparing more food than customers buy, and grocery stores ending up with perishables approaching their expiration dates.

To battle commercial food waste, “food rescue” groups use volunteers to pick up donated food and deliver it to nonprofits that feed the hungry.

“KFC is preparing chicken continuously, Chipotle is preparing food continuously. We rescue it while it’s still hot and freeze it quickly,” says Bill Reighard, founder and CEO of Food Donation Connection. The nonprofit has been battling food waste since 1992, coordinating donations from companies like Pizza Hut.

Another group, Feeding America, has built a nationwide network arranging regular pickups of surplus food from major grocery chains for delivery to more than 200 food banks.

Advocates say more and more people are volunteering, due to environmental concerns. Taking food that would be wasted to those in need is a good way to fight the despair and inaction that many people feel in the face of climate change and inequality, says Leah Lizarondo, co-founder of the nonprofit 412 Food Rescue, based in Pittsburgh.

“It’s a step that you can take today,” she says, “and it’s very clear what your impact is. It’s as clear as feeding someone that day.”

Along with arranging food pickups from supermarkets, Lizarondo’s nonprofit created an app called Food Rescue Hero that works almost like Uber or Lyft: People who are out in their cars can log in and see if any unwanted food is available at a nearby restaurant or store. They can volunteer on the spot to deliver it to a food pantry or soup kitchen.

Last fall, Food Rescue Hero announced a partnership with Reighard’s Food Donation Connection to build a shared online platform. No launch date has been announced yet, but tech teams at both nonprofits are collaborating to make volunteering easier nationwide and even globally.

“That whole ‘last mile logistics’ issue” is a challenge throughout the food recovery industry, Reighard says.

Traditionally, many charities picked up donated food themselves in fuel-inefficient trucks, he says. Collaborating with drivers who are already on the road is faster and more environmentally friendly.

Feeding America’s MealConnect app embraces the same approach. It has used since 2014 for pickups at chains like Walmart and Target. Those scheduled pickups continue, but beginning last summer, volunteers can also sign up to do impromptu, smaller food rescues.

Once they’ve registered at MealConnect.org or via the app, volunteers get a brief training session at a food bank and are outfitted with a small toolkit of food safety equipment.

Volunteers might be “between classes, or maybe they’re retired, or they’re an Uber or Lyft driver that wants to take a break from driving people around,” says Justin Block, managing director of MealConnect at Feeding America. The group currently has 300 active volunteers, he says.

And William G. Moseley, director of the Food, Agriculture & Society Program at Macalester College, adds: “We need to be careful that app-based volunteerism does not undercut the need to press governments and the public sector to reform policies and address structural problems.”

But as more people participate in rescuing commercial food, the hope is they may become more vocal about hunger issues in their community and more conscious of food waste at home too. 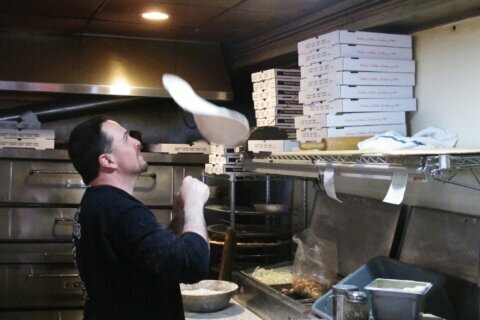