Washington — GOP Sen. Lindsey Graham of South Carolina introduced legislation Tuesday that would ban abortions nationwide after 15 weeks of pregnancy, embracing more severe restrictions on the procedure just as Democrats seek to elevate the issue of abortion rights ahead of November’s elections.

The bill from Graham is a more stringent version of a proposal introduced by him and other Republicans last year that would have banned abortions after 20 weeks of pregnancy. Called the Protecting Pain-Capable Unborn Children from Late-Term Abortions Act, the new measure prohibits doctors from performing abortions five weeks earlier in a pregnancy, after 15 weeks. It includes exceptions for abortions that are necessary to save the life of the mother or when the pregnancy is the result of rape or incest, and would leave untouched state laws that are more restrictive.

Graham appeared alongside anti-abortion rights advocates to unveil the legislation on Capitol Hill, telling reporters his proposal will bring the United States in line with most European nations that impose limits on abortion.

“Abortion is not banned in America. It’s left up to the elected officials in America to define the issue,” he said. “States have the ability to do it at the state level, and we have the ability in Washington to speak on this issue if we choose. I have chosen to speak. I have chosen to craft legislation that I think is eminently reasonable in the eyes of the world and I hope the American people.” 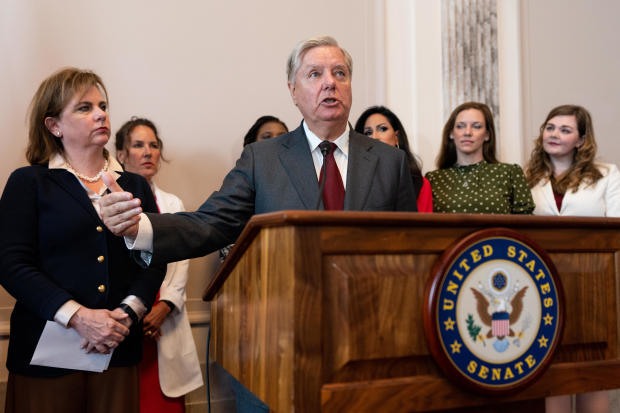 But Senate Minority Leader Mitch McConnell declined to commit to bringing the bill to the floor for a vote if Republicans win control of the Senate for the next Congress.

“I think most of the members in my conference prefer that this be dealt with at the state level,” he told reporters.

Graham’s bill comes in the wake of the Supreme Court’s blockbuster decision in June unwinding the constitutional right to an abortion. The ruling from the high court’s conservative majority left abortion policy up to the states, and the decision was cheered by anti-abortion rights advocates who have long said the authority the regulate abortion rests with the American people through their elected officials.

Graham in June called the Supreme Court’s reversal of Roe a “long overdue constitutional correction allowing the officials in the states to decide issues of life.” But his new proposal would reach from coast-to-coast, curtailing abortion in states with greater access, such as New York and Pennsylvania, where laws allow abortions to be performed up to 24 weeks of pregnancy.

White House press secretary Karine Jean-Pierre pushed back on the legislation introduced by Graham, calling it “wildly out of step with what Americans believe.”

“While President Biden and Vice President Harris are focused on the historic passage of the Inflation Reduction Act to reduce the cost of prescription drugs, health care, and energy — and to take unprecedented action to address climate change — Republicans in Congress are focused on taking rights away from millions of women,” she said in a statement. “The president and vice president are fighting for progress, while Republicans are fighting to take us back.”

Senate Majority Leader Chuck Schumer denounced Graham’s measure on the Senate floor as a “radical bill” and said the plan sends a “clear message from MAGA Republicans to women across the country: your body, our choice.”

The bill, though, is unlikely to become law with Mr. Biden in the White House and Democrats in charge of Congress, as it would require support from 60 senators to advance in the Senate. Democrats and Republicans each hold 50 seats in the upper chamber, with Vice President Kamala Harris casting tie-breaking votes, and a national 15-week abortion ban will not win the support of 10 Democrats.

Additionally, two Republicans, Susan Collins of Maine and Lisa Murkowski of Alaska, support abortion rights. Even if the proposal could clear the Senate, it would stall in the House, where Democrats hold the majority.

Graham acknowledged that it’s unlikely his bill will come up for a vote with Democrats controlling both chambers of Congress.

The attempt by GOP senators to curb abortion access comes as the issue has emerged as a motivator for voters in midterm races.

A poll from CBS News released last month found 59% of likely voters said abortion is “very important” in their vote for Congress this year. A June poll from CBS News, conducted after the Supreme Court reversed its nearly 50-year-old decision in Roe, found 58% of voters favor a federal law legalizing abortion nationwide.

Democrats are also pouring money into ads focused on abortion rights, spending roughly $30 million on more than 100 television ads mentioning abortion since early May, according to tracking by AdImpact.

Democratic candidates on the ballot in November quickly seized on Graham’s proposed ban, tying their GOP opponents to the legislation.

A spokesman for Pennsylvania Lt. Gov. John Fetterman, who is running against Dr. Mehmet Oz for a Senate seat, said voters there deserve to know whether Oz would support Graham’s bill if he were elected to the upper chamber. Similarly, a spokesman for Sen. Catherine Cortez Masto, a Democrat from Nevada who is defending her seat from a challenge from Republican Adam Laxalt, said Laxalt is an “automatic vote” for a federal ban on abortion.

“Republicans’ national abortion ban will be on the ballot, in every Senate race,” he said in a statement. “The GOP has shown, once again, the threat they pose to a woman’s right to make her own health care decisions — and voters will make their voices heard by standing with Senate Democrats in November.”