Despite desperate pleas from aides, allies, a Republican congressional leader and even his family, Donald Trump refused to call off the Jan. 6 mob attack on the Capitol, instead “pouring gasoline on the fire” by aggressively tweeting his false claims of a stolen election and celebrating his crowd of supporters as “very special," the House investigating committee showed Thursday night.
Listen now to WTOP News WTOP.com | Alexa | Google Home | WTOP App | 103.5 FM
(1/21) 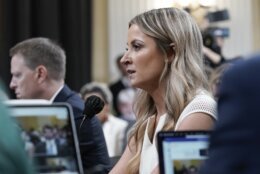 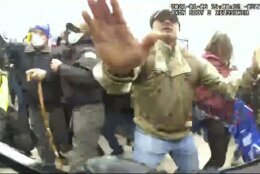 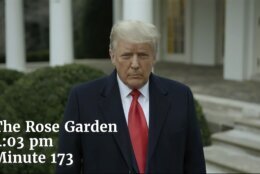 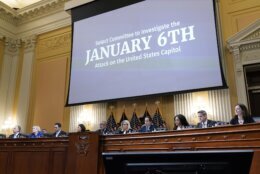 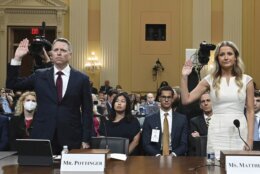 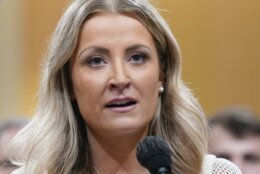 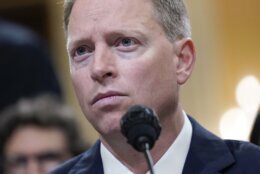 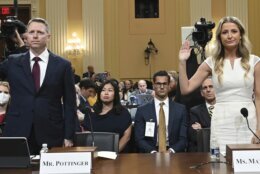 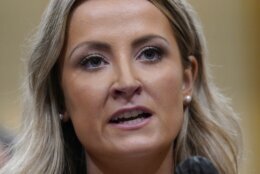 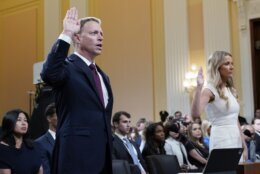 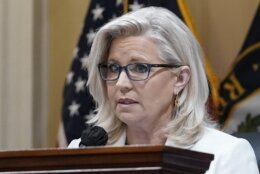 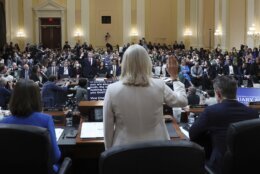 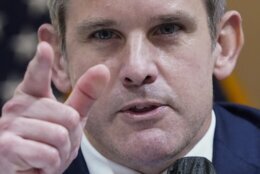 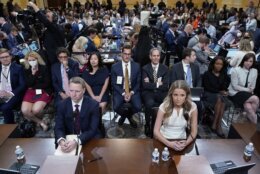 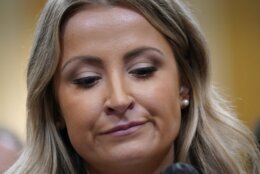 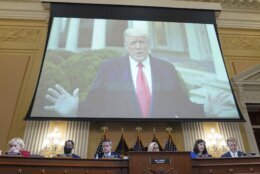 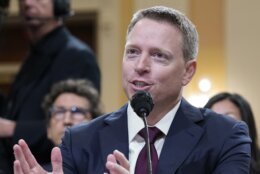 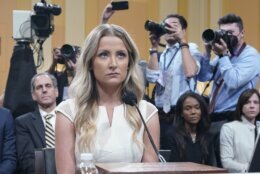 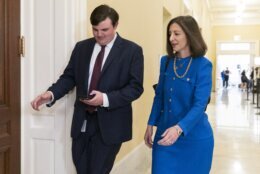 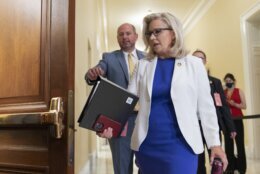 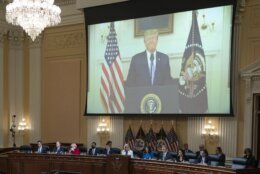 WASHINGTON (AP) — Despite desperate pleas from aides, allies, a Republican congressional leader and even his family, Donald Trump refused to call off the Jan. 6 mob attack on the Capitol, instead “pouring gasoline on the fire” by aggressively tweeting his false claims of a stolen election and celebrating his crowd of supporters as “very special,” the House investigating committee showed Thursday night.

The next day, he declared anew, “I don’t want to say the election is over.” That was in a previously unaired outtake of an address to the nation he was to give, shown at the prime-time hearing of the committee.

The panel documented how for some 187 minutes, from the time Trump left a rally stage sending his supporters to the Capitol to the time he ultimately appeared in the Rose Garden video that day, nothing could compel the defeated president to act. Instead, he watched the violence unfold on TV.

“President Trump didn’t fail to act,” said Rep. Adam Kinzinger, a fellow Republican but frequent Trump critic who flew combat missions in Iraq and Afghanistan. “He chose not to act.”

After months of work and weeks of hearings, the prime-time session started the way the committee began — laying blame for the deadly attack on Trump himself for summoning the mob to Washington and sending them to Capitol Hill.

The defeated president turned his supporters’ “love of country into a weapon,” said the panel’s Republican vice chair Rep. Liz Cheney of Wyoming.

Far from finishing its work after Thursday’s hearing, probably the last of the summer, the panel will start up again in September as more witnesses and information emerge. Cheney said “the dam has begun to break” on revealing what happened that fateful day, at the White House as well as in the violence at the Capitol.

“Donald Trump made a purposeful choice to violate his oath of office,” Cheney declared.

“Every American must consider this: Can a president who is willing to make the choices Donald Trump made during the violence of Jan. 6 ever be trusted in any position of authority in our great nation?” she asked.

Trump, who is considering another White House run, dismissed the committee as a “Kangaroo court,” and name-called the panel and witnesses for “many lies and misrepresentations.”

Plunging into its second prime-time hearing on the Capitol attack, the committee aimed to show a “minute by minute” accounting of Trump’s actions with new testimony, including from two White House aides, never-before-heard security radio transmissions of Secret Service officers fearing for their lives and behind-the-scenes discussions at the White House.

With the Capitol siege raging, Trump was “giving the green light” to his supporters by tweeting condemnation of Vice President Mike Pence’s refusal to go along with his plan to stop the certification of Joe Biden’s victory, a former White House aide told the committee.

Two aides resigned on the spot.

“I thought that Jan. 6 2021, was one of the darkest days in our nation’s history,” Sarah Matthews told the panel. “And President Trump was treating it as a celebratory occasion. So it just further cemented my decision to resign.”

The committee played audio of Gen. Mark Milley, chairman of the Joint Chiefs of Staff, reacting with surprise to the president’s inaction during the attack.

“You’re the commander-in-chief. You’ve got an assault going on on the Capitol of the United States of America. And there’s Nothing? No call? Nothing, Zero?” he said.

On Jan. 6, an irate Trump demanded to be taken to the Capitol after his supporters had stormed the building, well aware of the deadly attack, but his security team refused.

“Within 15 minutes of leaving the stage, President Trump knew that the Capitol was besieged and under attack,” said Rep. Elaine Luria, D-Va.

At the Capitol, the mob was chanting “Hang Mike Pence,” testified Matt Pottinger, the former deputy national security adviser, as Trump tweeted his condemnation of his vice president.

Pottinger, testifying Thursday, said that when he saw Trump’s tweet he immediately decided to resign, as did Matthews, who said she was a lifelong Republican but could not go along with what was going on. She was the witness who called the tweet “a green light” and “pouring gasoline on the fire.”

Meanwhile, recordings of Secret Service radio transmissions revealed agents at the Capitol trying to whisk Pence to safety amid the mayhem and asking for messages to be relayed telling their own families goodbye.

The panel showed previously unseen testimony from the president’s son, Donald Trump, Jr., with a text message to his father’s chief of staff Mark Meadows urging the president to call off the mob.

And in a gripping moment, the panel showed Trump refusing to deliver a speech the next day declaring the election was over, despite his daughter, Ivanka Trump, heard off camera, encouraging him to read the script.

“The president’s words matter,” said Luria, D-Va., a former Naval officer on the panel. “We know that many of the rioters were listening to President Trump.”

Luria said the panel had received testimony confirming the powerful previous account of former White House aide Cassidy Hutchinson of an altercation involving Trump as he insisted the Secret Service drive him to the Capitol.

Among the witnesses testifying Thursday in a recorded video was retired District of Columbia Metropolitan Police Department Sgt. Mark Robinson who told the committee that Trump was well aware of the number of weapons in the crowd of his supporters but wanted to go regardless.

“The only description that I received was that the president was upset, and that he was adamant about going to the Capitol and that there was a heated discussion about that,” Robinson said.

Chairman Bennie Thompson, appearing virtually as he self-isolates with COVID-19, opened Thursday’s hearing saying Trump as president did “everything in his power to overturn the election” he lost to Joe Biden, including before and during the deadly Capitol attack.

“He lied, he bullied, he betrayed his oath,” charged Thompson, D-Miss.

“Our investigation goes forward,” said Thompson. “There needs to be accountability.”

The hearing room was packed, including with several police officers who fought off the mob that day, and the family of one officer who died the day after the attack.

While the committee cannot make criminal charges, the Justice Department is monitoring its work.

So far, more than 840 people have been charged with federal crimes related to the Capitol riot. Over 330 of them have pleaded guilty, mostly to misdemeanors. Of the more than 200 defendants to be sentenced, approximately 100 received terms of imprisonment.

No former president has ever been federally prosecuted by the Justice Department.

Attorney General Merrick Garland said Wednesday that Jan. 6 is “the most wide-ranging investigation and the most important investigation that the Justice Department has ever entered into.”

Five people died that day as Trump supporters battled the police in gory hand-to-hand combat to storm the Capitol. One officer has testified that she was “slipping in other people’s blood” as they tried to hold back the mob. One Trump supporter was shot and killed by police.