For Missouri Rep. Cori Bush, the eviction fight is personal

For Rep. Cori Bush, a freshman Democrat from St. Louis, the debate over whether to revive the moratorium on evictions during the pandemic is deeply personal.
Listen now to WTOP News WTOP.com | Alexa | Google Home | WTOP App | 103.5 FM
(1/10) 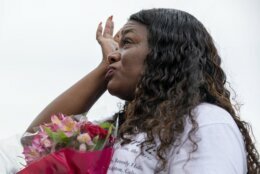 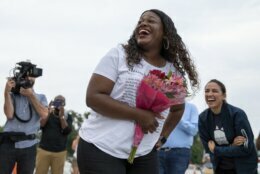 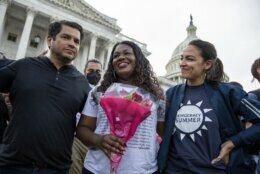 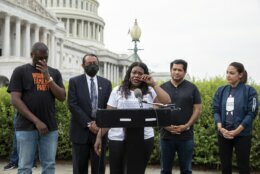 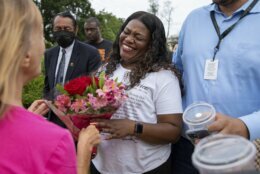 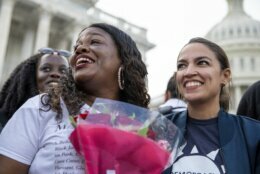 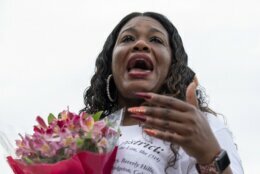 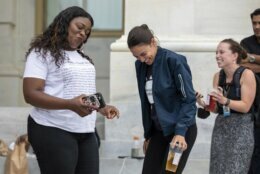 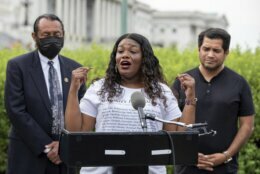 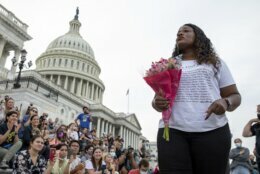 WASHINGTON (AP) — Roughly two decades before she was elected to Congress, Rep. Cori Bush of Missouri lived in a Ford Explorer with her then-husband and two young children after the family had been evicted from their rental home.

So for Bush, a first-term Democrat from St. Louis, the debate over whether to revive the moratorium on evictions during the pandemic is deeply personal. To dramatize her point, she started to sleep outside the U.S. Capitol last Friday to call attention to the issue as part of the effort to pressure President Joe Biden and Congress to act.

On Tuesday, she won. After coming under intense pressure, the Biden administration issued a new eviction moratorium that will last until Oct. 3, temporarily halting evictions in counties with “substantial and high levels” of virus transmissions, which covers areas where 90% of the U.S. population lives.

Bush’s experience sets her apart from the more conventional partisan sniping and grandstanding in the capital because of her direct connection to an urgent problem affecting millions of Americans.

“I know what it’s like to be evicted and have to live out of my car with my two babies,” Bush said in an interview Saturday. “As long as I am a sitting U.S. congressperson, I will not keep my mouth shut about it.”

Bush was a prominent part of a larger push among progressives to stop evictions. Her Capitol campout resonated: She was thrust into meetings with top congressional leaders and administration officials and sought after for interviews.

She met Monday with Senate Majority Leader Chuck Schumer and had a brief chat with Vice President Kamala Harris — attention that punctuates a political rise that took Bush from leading protests against police brutality in Ferguson, Missouri, to the halls of Congress in little more than five years.

House Speaker Nancy Pelosi on Tuesday gave a salute to Bush “for her powerful action to keep people in their homes.”

Schumer was more effusive. “She made yesterday’s announcement possible,” he said Wednesday.

Before reversing course, the Biden administration initially argued that it didn’t have legal authority to extend the moratorium again, pointing to a Supreme Court opinion in June that suggested Congress should pass legislation to do so.

A last-minute attempt to pass a bill through the House also came up short Friday. Then the chamber adjourned and lawmakers left town for an extended August recess — a response Bush says “failed to meet this moment.”

On Tuesday, before the administration’s announcement, Bush said: “Am I supposed to just go home? No, I’m an organizer. I am an activist. So I fell back into what I know how to do.”

It is activism born of personal experience.

In 2001, Bush became ill while pregnant with her second child and had to quit her job at a preschool. The lost income led to their eviction.

For about three months, the couple lived out of their Explorer with two playpens in the back. She said that, at the time, she was working in a low-wage job. Eventually, her family, already struggling themselves, was able to help her find a home.

“I don’t want anyone else to have to go through what I went through, ever,” Bush said while wiping away tears.

The couple later divorced, and Bush went back to school, earning a nursing degree. She also became a pastor.

Her life changed in 2014 when a white police officer fatally shot Michael Brown, a Black 18-year-old, in the St. Louis suburb of Ferguson, Missouri.

Bush joined the thousands of activists in the protests that followed the shooting and quickly became a leader of the movement that sought police and criminal justice reform in Ferguson and throughout the St. Louis region. She was back on the streets again three years later after a white St. Louis police officer was acquitted in the shooting death of a Black suspect.

Her activism fueled an interest in politics. She ran unsuccessfully in the Democratic primary for the U.S. Senate in 2016, followed by another losing primary race for a congressional seat in 2018. She was defeated by roughly 20 percentage points.

Two years later, her supporters sensed a change in the political landscape after George Floyd’s death. With backing from the progressive group Justice Democrats, she sought a rematch against longtime Democratic Rep. William Lacy Clay — and won.

“They counted us out,” Bush said after her primary win. “They called me — I’m just the protester, I’m just the activist with no name, no title and no real money. That’s all they said that I was. But St. Louis showed up today.”

She won easily in heavily Democratic St. Louis in November.

The Rev. Darryl Gray, a political adviser to Bush, said her tenacity was apparent early in her failed 2016 bid for Senate, when she was willing to campaign in rural and very conservative corners of the state.

“She wasn’t afraid to show up and speak for justice in places where people would warn us about going, some of these ‘sunset towns,’” Gray said. “She knew she wouldn’t get support, but people respected the fact she showed up.”

Still, there are some who questioned the decision to pick a fight with congressional leadership and the president from her own party. Administration and congressional officials also noted that much of the money Congress had allocated to provide housing assistance has not been distributed by states.

House Majority Whip Jim Clyburn, D-S.C., said he was “sensitive” to Bush’s aim, but suggested she may be waging the wrong battle.

“It’s not the federal government that’s doing it,” Clyburn said. “If you’ve appropriated $46 billion for the country, and only $3 billion has been used, then that’s not Congress. … It’s on whoever has got the money tied up.”

On Tuesday evening, after the administration made its announcement, Bush tweeted out a photo of her and others sitting on the Capitol steps with a one-word caption: Grateful.