CORONAVIRUS NEWS: Latest COVID-19 numbers in DC, MD, VA | Staff not required to be tested before Mount Rushmore event | How to travel during the pandemic
Home » Congress News » Once a budget line,…

WASHINGTON (AP) — The military assistance package for Ukraine that’s at the center of the impeachment inquiry started as a mere line item in a massive spending bill. The aid was little discussed, was noncontroversial and was approved with strong bipartisan support.

Sending military equipment and other help to Ukraine had become routine in Congress and was seen as a potent way to deter Russian aggression. Since Russia annexed Crimea from Ukraine in 2014, Congress has authorized $1.5 billion to Ukraine, and President Donald Trump signed off on delivering anti-tank Javelin missiles in 2017.

“From the time of Russia’s invasion, we have had unity,” said Rep. Marcy Kaptur, D-Ohio, a strong supporter of Ukraine who sits on a powerful House Appropriations panel with direct control over the Pentagon budget.

So, lawmakers were mystified upon learning in August that the latest installment of the money was being held up on the orders of the White House. At issue was a $250 million installment of military aid approved last fall and an additional $141 million in State Department assistance. Trump had ordered the aid frozen, a decision put in place by his acting chief of staff, Mick Mulvaney.

One U.S. diplomat told House impeachment investigators that he learned the aid was held up in a July 18 conference call.

“I and others sat in astonishment — the Ukrainians were fighting the Russians and counted on not only the training and weapons, but also the assurance of U.S. support,” William Taylor said in a statement to lawmakers Wednesday. He accused Trump of holding back “vital security assistance for domestic political reasons,” namely an investigation into a Ukrainian gas company Burisma and debunked claims of Ukrainian interference into the 2016 U.S. presidential campaign.

“In an instant, I realized that one of the key pillars for our strong support of Ukraine was threatened,” Taylor said.

What Taylor and others did not know at the time was that Trump had asked Ukrainian President Voldomyr Zelenskiy for a “favor,” including an investigation into work done for Burisma by Hunter Biden, son of former Vice President Joe Biden, a Trump political rival.

With the military assistance still on hold in the later summer, alarm bells soon began clanging on Capitol Hill.

“It was, like, ‘Why? Why would this be? What’s happening?” Kaptur said. “Not knowing what else was going on.”

Pro-Ukraine lawmakers said the new Ukrainian government had been placed in a desperate position.

“There is near panic in Ukraine today about America’s commitment to the U.S.-Ukraine relationship and to our continued commitment to Ukrainian sovereignty,” said Sen. Chris Murphy, D-Conn., after visiting Ukraine’s capital last month. “They are desperate for a bipartisan signal from the United States that we remain with them.”

Congressional aides didn’t catch wind of the delay in aid until August, shortly before Politico broke the story and set off a scramble in both countries.

The mysterious holdup led Senate Majority Leader Mitch McConnell, R-Ky. — a strong supporter of the funding — to call both Defense Secretary Mark Esper and Secretary of State Mike Pompeo to demand the $250 million Pentagon aid package be released, along with the $141 million in nonmilitary assistance. Others like Sen. Rob Portman, R-Ohio, got involved, as did Sen. Lindsey Graham, R-S.C.

“I have met President Zelenskiy, who is a pro-America reformer,” Portman wrote on Twitter. “The security assistance should be transferred to #Ukraine now.”

“He called up: ‘Please let the money go.’ I said ‘Rob, I hate being the country that’s always giving money,'” Trump said. “I gave the money because Rob Portman and others called me and asked. But I don’t like to be the sucker and European countries are helped far more than we are.”

The eventual release of the aid to Ukraine, however, came only after a key Senate panel was about to deliver an embarrassing rebuke by freezing part of the Pentagon’s readiness budget until the Ukraine aid was distributed.

The administration released the aid the night before the Appropriations panel was to vote, a move that Graham, a Trump ally, attributed to a White House desire to avoid the bipartisan slap.

Taylor, in his testimony, said he feared the aid was being released because the Ukrainians had agreed to the investigations that Trump was demanding. But a public commitment was never made.

Mulvaney acknowledged last week that Trump’s decision to hold up military aid to Ukraine was linked to his demand that Ukraine investigate the Democratic National Committee and the 2016 U.S. campaign.

“That’s why we held up the money,” Mulvaney said.

The money was little discussed, was noncontroversial and was approved with strong bipartisan support.

So, lawmakers were mystified upon learning in August that the $391 million was held up. Trump had ordered the aid frozen, a decision carried out by acting White House chief of staff Mick Mulvaney.

One U.S. diplomat has told House impeachment investigators he learned the aid was being withheld in a July 18 conference call. The diplomat, William Taylor, said he was astonished by the decision.

The eventual release of the aid to Ukraine came only after senators were about to deliver an embarrassing rebuke of the White House. 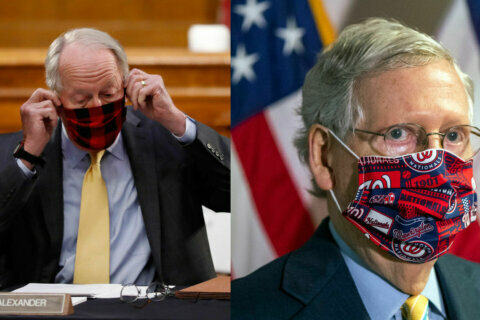