WASHINGTON (AP) — Rep. Elijah Cummings said somebody once told him he would see one guy when he sat down…
Listen now to WTOP News WTOP.com | Alexa | Google Home | WTOP App | 103.5 FM

WASHINGTON (AP) — Rep. Elijah Cummings said somebody once told him he would see one guy when he sat down with President Donald Trump “and then you might see another guy” the next day.

Cummings eventually saw that other side of Trump — the one who called the longtime Baltimore-area congressman a “brutal bully” and his district a “disgusting, rat and rodent infested mess.” That was after the burly Cummings, as chairman of the House Oversight and Reform Committee, angrily berated a Homeland Security official at a congressional hearing on the administration’s policy of separating migrant families at the southern border.

Cummings, who died Thursday at age 68 of complications from chronic health issues, refused to respond in kind. Instead, he invited Trump to come see the district for himself.

Trump on Thursday had nothing but praise for Cummings, tweeting that he was a “highly respected” leader whose voice “will be very hard, if not impossible, to replace.” He ordered that U.S. flags fly at half-staff through Friday out of respect for the congressman.

Relations between the veteran Democratic lawmaker and the Republican political newcomer seemed to get off to a positive start just a few weeks after Trump took office.

The two met in the Oval Office in March 2017 to discuss legislation Cummings and other lawmakers planned to offer to help lower prescription drug prices, an interest the two men shared. Cummings told reporters afterward that the issue had come up when he ran into Trump at the president’s inaugural lunch in January and they agreed to talk more.

Trump was “enthusiastic” about the proposal, Cummings said, and Trump tweeted about the “Great discussion!” they’d had. A White House statement said Trump had expressed to Cummings his interest in working in a “bipartisan fashion” to help make prescription drugs more affordable.

But the relationship collapsed after the drug proposal stalled, voters put Democrats in control of the House in the 2018 elections and Cummings, in his new role as chairman, ramped up oversight of a White House that had faced scant scrutiny when Republicans ran the chamber.

At the time of his death, Cummings was among the House committee chairmen leading an impeachment inquiry Trump has denounced as “witch hunt.”

On its own, Cummings’ committee was examining conflict-of-interest issues involving Trump’s hotel in Washington and family members serving in the White House. It also was looking into how the White House, and Trump, approved security clearances, including for Trump’s son-in-law, Jared Kushner.

The committee also heard testimony from Michael Cohen, Trump’s former personal attorney, a key figure in federal law enforcement probes of potential coordination between Russia and Trump’s campaign, and campaign finance violations involving hush money paid to women who said they had had intimate relationships with Trump. Trump has denied those relationships.

Cummings had also reviewed the administration’s treatment of migrant children after they were separated from adults who brought them to the border.

Rep. Brenda Lawrence, D-Mich., who served on Cummings’ committee, said the chairman believed in his constitutional responsibility to keep watch over the executive branch.

“He was so committed to protecting our democracy,” Lawrence told The Associated Press in a telephone interview Thursday. “He did not take his role lightly.”

In response to the series of July attacks by Trump, Cummings invited the president to tour his district, from the poorest parts of the majority-black city of Baltimore to the more well-off areas in suburban Baltimore and Howard counties.

“Come to Baltimore. Do not just criticize us, but come to Baltimore and I promise you, you will be welcomed,” the lawmaker said in August in his first public comments about the president’s criticism. Trump had also complained about other cities run by Democrats he did not name. The comments were widely seen as a race-centered attack on big cities with minority populations.

Trump defended his comments, which were widely condemned, before moving on from Cummings. He also said he would visit Baltimore “at the right time.”

That turned out to be in September, when he addressed House Republicans holding their annual retreat in the city. But Trump did not meet with any city officials or otherwise tour the city while there.

In a subsequent August appearance at the National Press Club, Cummings recalled being interviewed by a newspaper reporter, who said he was Trump’s “worst nightmare.” Cummings, the son of sharecroppers who rose to become a civil rights champion and leading member of Congress, said he explained that that was not his intention. 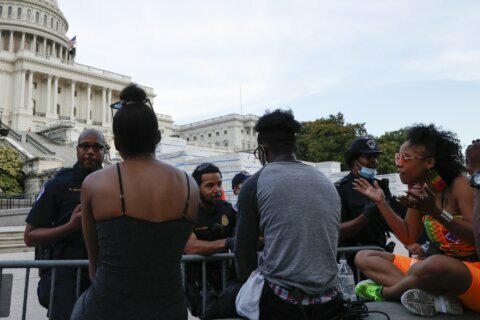