“They told you I was doing a story about essential workers, right?” I asked Davis.

“Ah, we’re not doing a story about essential workers,” I told her.

Truth be told, I had to lie to everyone I spoke to for this story. And when they discovered my real intent, most were speechless – lips aquiver – many in tears.

My partner in this joyful deception was an anonymous, wealthy businessman known to me only as Secret Santa. In a normal year, Secret Santa personally hands out hundreds of $100 bills to random strangers. But this year, the novel coronavirus called for a novel sleigh ride. So he mailed packages to carefully selected essential workers across the nation. 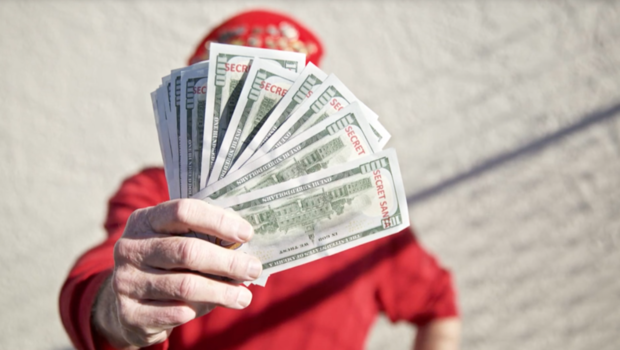 “And inside that is a sealed envelope that says, ‘Do not open until instructed to do so by Steve Hartman at CBS,'” Secret Santa told me.

His targets included Ashton Dooley, a sanitation worker from Sarasota, Florida, whose brand-new bride has cancer.

“She let me shave her head that first time,” Dooley said. “That’s when I knew I wanted to marry her.”

Next was Elgin Thrower, a security guard from Kansas City with a son with special needs and a dream to be a police officer.

“In law enforcement, I can make a difference,” Thrower said.

And Danielle Dip is a waitress from Pittsburgh who’s way behind on rent.

“It has been a pretty bad year,” she said. “But somehow, somewhere, something’s going to work out.”

I then introduced her to Secret Santa via a video call. Dip’s bad year was about to get a whole lot better.

“Open up that sealed envelope,” Secret Santa told her.

Everyone’s bad year was about to get a whole lot better.

“There’s a thousand dollars!” Thrower said as he smiled.

In the coming weeks, Secret Santa will give away about $100,000 total – to total strangers.

“Oh my God! I can’t believe this!” she said while fighting back tears.

But, of course, the money isn’t the real gift here.

“You know kindness, when freely given, with no expectation in return – is, in fact, unconditional love,” Secret Santa said. “And that’s really what we’re giving them.”

And what does it feel like to receive such a gift? Well, sometimes being speechless says it all.

To contact On the Road, or to send us a story idea, email us: OnTheRoad@cbsnews.com.