VANCOUVER, British Columbia (AP) — Nearly 300 people trapped overnight in their vehicles by mudslides on a highway in British Columbia were being flown to safety by helicopters Monday while authorities sought to determine if anyone was swept up in the flow of debris set off by torrential rain.

A yellow Cormorant chopper dropped people off near the community center in the town of Agassiz before taking off for another rescue trip.

“Trapped between two slides are approximately 275 additional people, including 50 children, who were advised to shelter in place overnight as debris was unstable and unsafe to cross,” the City of Vancouver and Canada Task Force 1 said in a joint release.

Multiple highways in British Columbia were closed due to the downpour.

Melanie Forsythe said her drive home from Vancouver to Hope, British Columbia, had her making at least five detours as rain washed out a bridge, closed roads and trapped her overnight between two mudslides before a helicopter landed on the highway and carried her to Agassiz.

Forsythe, who was with her boyfriend, Shawn Ramsay, and a friend, made it to the town about 18 hours after they were forced to stop on Highway 7 with nearly 300 other travelers.

“All three of us were kind of hyping each other up, saying it’s going to be good, we’re going to get out of here. But then we all had moments like, ‘Is this it? Is this the last time we’re going to see our kids?’ We were talking to our parents and our families, but it was just a scary situation,” she said.

Forsythe said everyone in her vehicle joined about two dozen people on the flight to Agassiz, where nearly 80 others from the highway had already arrived.

Forsythe said their vehicles were expected to be towed. Her group was about a nine-hour drive from home and couldn’t find a hotel room to spend the night.

Jashanpreet Singh and his wife, Harleen Kaur, were also caught between the two slides Sunday and said they came upon a vehicle that had been partially crushed by a slide.

A 9-year-old boy was injured and had blood coming out of his nose and ears, Kaur said. Firefighters who were first to the scene Sunday were able to take the boy to care, she said.

The couple was flown out Monday. Singh said they learned a valuable lesson because they had no food or water with them.

The deluges in parts of the province also caused the interior town of Merritt to issue an evacuation order Monday, warning its 7,000 residents not to use water from faucets or flush toilets.

Flood warnings and watches were issued on rivers and streams for areas from Merritt south to the border with the United States, the lower Fraser region and sections of southern Vancouver Island. 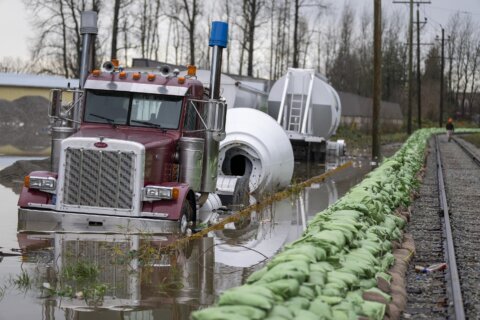