LILLOOET, British Columbia (AP) — A wildfire that forced people to flee a small town in British Columbia that had set record high temperatures for Canada on three consecutive days burned out of control Thursday as relatives desperately sought information on evacuees.

The roughly 1,000 residents of Lytton had to abandon their homes with just a few minutes notice Wednesday evening, after searing the previous day under a record high of 121.2 F (49.6 C).

The province’s public safety minister, Mike Farnworth, said Thursday afternoon that most homes and buildings in Lytton had been destroyed and some residents were unaccounted for.

The British Columbia Wildfire Service said the Lytton blaze was raging out of control over an area spanning roughly 80 square kilometers (30 square miles). Several other fires were burning in the region as a heat wave baked western Canada.

Lytton city council member Lilliane Graie, on behalf of Mayor Jan Polderman, said in an email Thursday that the fire had devastated the town, a village about 153 kilometers (95 miles) northeast of Vancouver.

“Our people are scattered north and south and we are trying to establish who is where,” she wrote.

At least some of the people who fled Lytton came to a recreational a center in Lillooet, a town about 63 kilometers (40 miles) to the north.

John Haugen, a deputy chief with the Lytton First Nation, said leaders were trying to account for members who did not get to Lillooet.

“It’s incomprehensible, people are so anxious and worried about what comes next for them,” he said, saying the community had suffered tremendous “devastation and loss.”

Rosanna Stamberg, who lives in Enderby, said she was trying to track down her son and daughter, Alfred and Marjorie Nelson, who live about 8 kilometers (5 miles) from the center of Lytton.

She said the lack of cellphone service had prevented her contacting them. “I’m very worried,” she said.

In a television appearance, British Columbia Premier John Horgan, said: “Three consecutive days of the highest recorded temperature in Canadian history all happened in Lytton this week. To have a heat wave and a horrific fire is so troubling and so challenging for the people of this community.”

Horgan, the premier, said he had heard “antidotal information” that a train might have started the fire but it was too early to say.

“Lytton has been devastated and it will take an extraordinary amount of effort to get that historic location back to what it was,” he said.

Edith Loring-Kuhanga, an administrator at the Stein Valley Nlakapamux School, said she and fellow board members had to cut short a Zoom interview with a prospective teacher as the fire burned down their block.

She said she initially didn’t pay attention to a siren going off outside, but then got a call from a school board member telling her to flee.

“He said, ‘I’m down here at the fire and you got to leave, grab whatever you can quickly,‘” Loring-Kuhanga recalled.

The wreckage was extensive, she said.

“It was just unbelievable. It was just a nightmare,” she said. “So many community members have lost everything, they just didn’t have time.”

Roughly 15 kilometers (10 miles) to the south of Lytton, in the First Nations community of Kanaka Bar, Jean McKay said she and her 22-year-old daughter, Deirdre McKay, started to panic as the smell of smoke grew stronger.

“I was still sitting there and wondering what to pack, emotionally walking out my door but thinking ‘I’m leaving all this behind.’ It’s hard. Very hard,” McKay said. “My daughter phoned before we lost services and stuff, she’s telling us, ‘Get out of there, get out of there.’”

There was one memento her daughter couldn’t leave behind: “She grabbed my dad’s picture off the wall,” McKay said. “I’m telling her, ‘We’re walking out and this is the home we built forever and that you guys grew up in.’ It’s harsh.”

Canada to let vaccinated US citizens enter country on Aug. 9 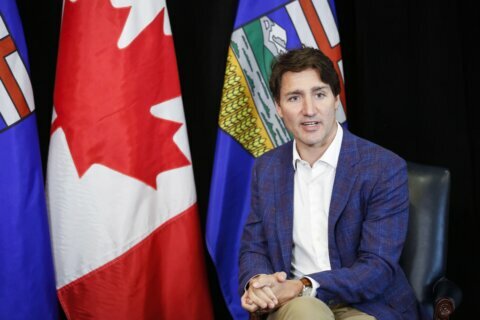 Fully vaccinated Americans may enter Canada as of mid-August