TORONTO (AP) — Autism Canada on Tuesday denounced what it called “egregious claims” by a defense lawyer that the man who admitted using a van to kill 10 pedestrians in Toronto didn’t know what he was doing was wrong because he has autism spectrum disorder.

Alek Minassian faces 10 counts of first-degree murder and 16 counts of attempted murder in connection with the April 23, 2018, attack that drew attention to an online world of sexual loneliness, rage and misogyny.

Minassian has pleaded not guilty, and his lawyer, Boris Bytensky, argues his client is not criminally responsible. Bytensky said this week that Minassian only understood wrongfulness on an intellectual level but not at a rational level, and therefore could not make a rational decision as to whether or not to carry out the attack.

“Autism Canada wishes to respond emphatically that these claims are wholly unsubstantiated, merely speculative, and made carelessly without any published evidence proving autism, on its own, is a risk factor for becoming violent against other people,” the organization wrote.

It noted, as has the defense, that people with autism are far more likely to be victims of violence and bullying than perpetrators.

“There is no psychosis in ASD and no tendency to anti-social behavior any more than in the general population. I think you would not get any serious objection from the academic community on that account,” said Dr. Peter Szatmari, head of the Child and Youth Mental Health Collaborative.

Minassian’s father, Vahe Minassian, has testified that his son was diagnosed when he was 5 years old. On Monday, the elder Minassian painted his son as a man with little to no emotion due to autism spectrum disorder. He said his son showed no remorse, offered no apology and did not understand what he did was wrong. He denied Tuesday that he was tailoring his testimony to help his son. The trial resumes Wednesday.

The judge has said the case will turn on Minassian’s state of mind at the time.

Minassian, 28, told police he belonged to an online community of sexually frustrated men, some of whom have plotted attacks on people who have sex.

He admitted to police that he drove a rental van into crowds of pedestrians in a busy north Toronto neighborhood. Eight women and two men ranging in age from 22 to 94 died. 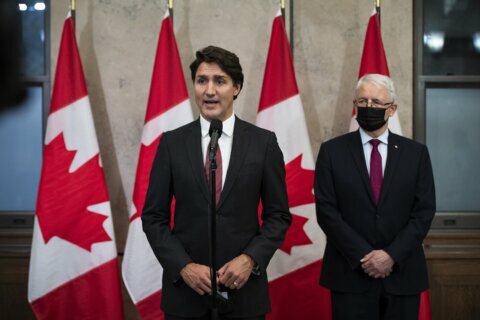