TORONTO (AP) — Canada imposed mandatory self-isolation Wednesday for those returning to Canada under the Quarantine Act.

Deputy Prime Minister Chrystia Freeland initially said the system would begin at midnight Wednesday and require 14 days of isolation. But several hours later, government officials said the quarantine order had been in effect for more than 12 hours already.

“It will be a legal obligation for people entering Canada from outside Canada,” Freeland said. “Essential workers are excluded.”

More than a million Canadians and permanent residents returned to Canada between March 14 to March 20, according to Canada Border Services.

Truck drivers and health care workers crossing the border are exempted from the quarantine act and Canada and the United States already closed their common border for all non-essential travel. Canada relies on cross border trade for essential goods like food and medicine.

Freeland said people who have already returned should be self-isolating at home already, noting it is critical to protect the health of Canadians and ultimately to ensure that the country’s economic rebound comes more quickly.

“If we can flatten the curve then we can go back to normal life more quickly,” she said.

Prime Minister Justin Trudeau also announced his government will offer $2,000 Canadian (US$1,395) a month, for the next four months, for workers who lose their income as a result of the pandemic.

Trudeau said Canada is facing a once in a generation challenge and noted a million Canadians applied for employment insurance in a week.

“Help is on the way,” Trudeau said.

Trudeau said if a Canadian loses their job because of COVID-19 — whether they are full-time, contract or self-employed — the new benefit is available. He said it also covers a person who is sick or quarantined, or looking after someone sick. Workers still employed but not receiving income because of the crisis are eligible.

His government also it would implemented long-promised tax credits for newspapers where they can can claim on up to 25% of wages.

Trudeau made the remarks outside his residence, where he is in isolation after his wife tested positive for the virus. He says his wife is doing “much much better” and he and his kids have no symptoms.

In the Atlantic Coast province of Newfoundland, 44 of the province’s 67 cases are linked to a funeral home in St. John’s, where an individual who tested positive attended visitations at some point between March 15 and 17.

The Pacific Coast province of British Columbia government, meanwhile, is suspending evictions and offering a $500 monthly rebate to help renters and landlords during the COVID-19 pandemic. 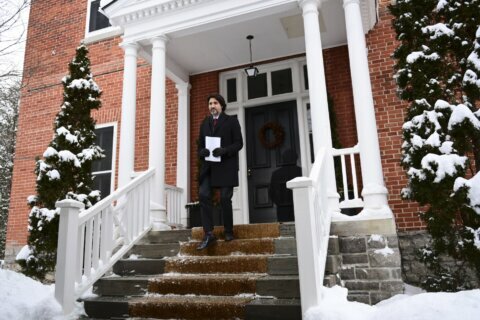 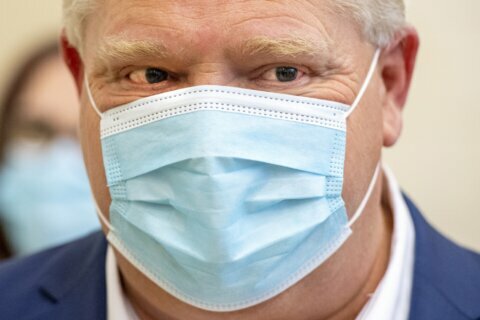