ConAgra cut its outlook for the year with inflation outpacing the price hikes put into place by the major food producer.

The cost of goods increased 10.1%. during the quarter and on Thursday, the Chicago company said it expects full-year gross inflation to be approximately 16% compared with its previous guidance of 14%.

Another round of price increases will be needed, the maker of Birds Eye, Slim Jim and Reddi-wip said Thursday.

“We experienced higher-than-expected cost pressures as the third quarter progressed and expect those pressures to continue into the fourth quarter, particularly in certain frozen, refrigerated, and snacks businesses,” said CEO Sean Connolly. “In response, we have taken steps to implement additional inflation-driven pricing actions.”

Global inflation is hitting consumers hard as prices rise for essential goods like fuel, housing and food. An inflation gauge that is closely monitored by the U.S. Federal Reserve jumped 6.4% in February from last year.

The Fed signaled this week that it would take a much more aggressive approach to curtail inflation, meaning that borrowing money is about to grow more expensive.

Rising prices have caught producers of everything from food to cars in a pinch as they try to cover rising costs while trying to avoid losing customers.

Higher prices being rolled out by ConAgra will not become evident until the first fiscal quarter of 2023, Connolly said, and company shares slipped 1% at the opening bell.

The Chicago company lowered it’s adjusted per-share earnings expectations by 15 cents, to $2.35. That’s well below the $2.42 per share Wall Street had been projecting, according to a survey of industry analysts by FactSet.

Foodservice segment sales surged 18.9% as restaurant traffic continued to improve amid an easing of COVID-19 restrictions. Sales for the grocery and snacks unit climbed 6.2% on increased prices and favorable brand mix.

Looking ahead to the fourth quarter, ConAgra expects adjusted earnings of about 64 cents per share. Gross inflation is anticipated to be approximately 16%.

Dulles is most expensive for average air fare 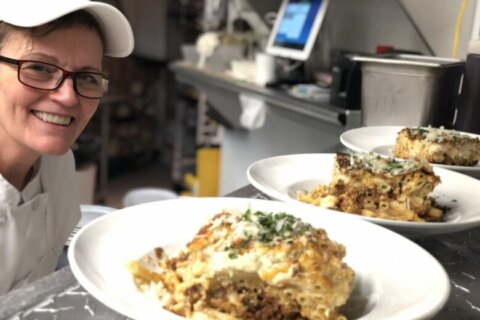