US consumer confidence rebounds in October after 3 declines

SILVER SPRING, Md. (AP) — U.S. consumer confidence rose in October after three straight declines as the public’s anxiety about the delta variant of the coronavirus appear to have abated.

The Conference Board reported Tuesday that its consumer confidence index rose to a reading of 113.8 in October, up from 109.8 in September.

Consumer spending makes up about 70% of all economic activity in the U.S., so economists pay close attention to the numbers for a better idea of what’s to come for the national economy.

In addition to the delta variant, short-term inflation concerns rose to a 13-year high, but the impact on confidence was muted, said Lynn Franco, senior director of economic indicators at the Conference Board.

The Conference Board’s most recent survey indicates that the proportion of consumers who plan to purchase homes, automobiles, and major appliances all increased in October, a sign that consumer spending will continue to support economic growth through 2021. Almost half of respondents said they intend to take a vacation within the next six months. That’s the highest since February 2020, right before the pandemic ravaged the global economy.

The October increase in consumer confidence surprised analysts, who had broadly expected a fourth straight decline.

Earlier this month, the Labor Department reported another jump in consumer prices in September that sent inflation up 5.4% from where it was a year ago. That matched the largest increase since 2008 as snarled global supply chains continue to create havoc.

How those factors have played into July-through-September quarter will be more evident on Thursday when the government releases its first look at economic growth, as measured by the gross domestic product, for the third quarter. Economists are forecasting GDP grew at an annual rate of around 3% in the third quarter, a marked slowdown from growth rates of 6.1% in the first quarter and 6.7% in the second quarter.

The nation’s business economists are slightly less optimistic about growth prospects over the next year, noting a number of threats ranging from the previously mentioned inflation, COVID-19 and snarled supply chains.

Clock is ticking on student loan deferrals. Do something now 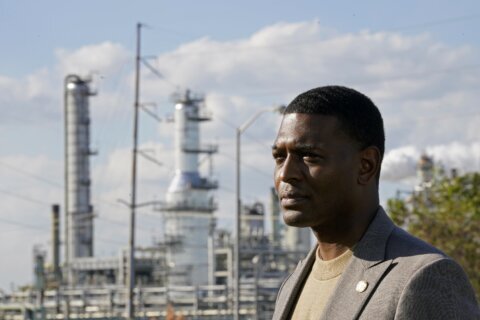