NEW YORK (AP) — The International Brotherhood of Teamsters, a union that represents 1.4 million workers, is setting its sights on Amazon.

On Thursday, it will vote on whether to make organizing Amazon workers its main priority. The Teamsters accuse the nation’s second-largest private employer of exploiting employees by paying them low wages, pushing them to work at fast speeds and offering no job security.

“There is no clearer example of how America is failing the working class than Amazon,” says the resolution that will be voted on by representatives from 500 Teamsters local unions Thursday.

The resolution is expected to be approved and would allow the Teamsters to “fully fund and support” efforts to unionize Amazon workers and create a division to aid them and “protect the standards in our industries from the existential threat that is Amazon.” It declined to say how much money it will spend on the efforts.

Any attempt to unionize Amazon is likely to be an uphill battle. None has been successful in the company’s 26-year history, including the most recent one at an Alabama warehouse where workers overwhelmingly voted against joining a union.

But the Teamsters said it will try a different strategy. Randy Korgan, the Teamsters’ National Director for Amazon, wrote in Salon earlier this month that unionizing one facility at a time doesn’t work because companies like Amazon have the money and legal resources to squash those efforts from the inside. Instead, Korgan wrote that organizing Amazon workers will take “shop-floor militancy,” such as strikes in warehouses and in city streets.

Amazon didn’t respond to a request for comment on Wednesday.

The online shopping behemoth had pushed hard against unionizing efforts at the warehouse in Bessemer, Alabama. Amazon argued that it paid workers at least $15 an hour and already offered the benefits unions want. It hung anti-union signs throughout the warehouse, including inside bathroom stalls, and held mandatory meetings to convince workers why the union is a bad idea, according to one worker who testified at a Senate hearing.

When the votes were counted in April, nearly 71% of the more than 2,500 valid votes counted rejected a union.

The organizing in Bessemer was led by the New York-based Retail, Wholesale and Department Store Union, which represents 100,000 workers at poultry plants; cereal and soda bottling facilities; and retailers such as Macy’s and H&M.

The Teamsters is much larger. The union has been around since the early 1900s when goods were delivered by horse-drawn wagons. It now represents 1.4 million truckers, UPS employees and other types of workers, including nurses and warehouse mechanics.

“They’re a strong, successful union,” said Alex Colvin, the dean of Cornell University’s School of Industrial and Labor Relations, who added the Amazon workers reflect the type of members it already represents. “They’re a formidable adversary for Amazon to face.”

The Teamsters is targeting workers in Amazon’s fast-growing delivery network, such as drivers and warehouse workers who pack and ship orders. In the past couple of years, Seattle-based Amazon has been working to deliver most of its packages itself and rely less on UPS, the U.S. Postal Service and other carriers.

It has built several package-sorting hubs at airports, opened warehouses closer to where shoppers live and launched a program that lets contractors start businesses delivering packages in vans stamped with the Amazon logo. In January, it bought 11 jets that it plans to use to deliver orders to shoppers faster.

The Teamsters said in its resolution that Amazon’s delivery network has become a dominate force in the logistics industry in a short amount of time and the way it treats workers could threaten the working standards it has set at UPS and at other parcel, freight and delivery companies.

This story has been updated to clarify that not all 1.4 million Teamsters members are delivery workers.

Senators behind $1T public works plan show off their work 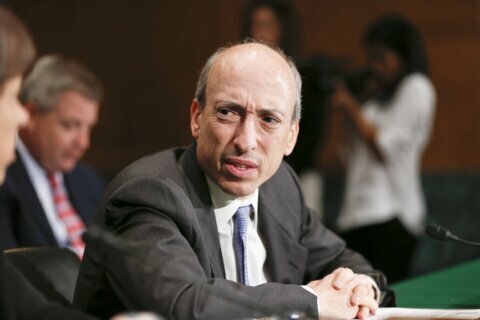