High inflation? A generation of investors has never felt it

NEW YORK (AP) — The central question gripping Wall Street is whether the burst of inflation hitting the economy as it recovers from the pandemic is just temporary or the start of a real problem. The answer threatens to crack the stock market’s incredible, record-setting run that began in March 2020.

Adding to the fog of the debate — and the uncertainty that has markets churning — is that more than a generation has passed on Wall Street since investors had any experience at all with high, long-lasting inflation.

What’s clear is that the average cost of regular gasoline has jumped to $3.04 per gallon from $1.89 a year earlier. Used cars and trucks cost 21% more last month than a year before. Airline fares ascended nearly 10%.

Many economists, as well as the Federal Reserve, say not to worry about any of this. They’re convinced these fast price gains will prove fleeting. If the experts are wrong, however — remember last month’s jobs data, where economists’ predictions were wildly off the mark? — it could ravage the economy and force the Fed to reverse its record-low interest rate policy and trim the bond purchases that are boosting markets.

That possibility has led to some jagged moves in the stock market. The S&P 500 slumped 2.1% in one day last week after a report showed the Consumer Price Index rose at the fastest pace since 2008 in the year through May.

The difficulty is that the last time very high, long-lasting inflation was a serious threat for the economy was before many of today’s professional money managers were born. To have had experience in such a market, they need to remember the 1970s and early 1980s, when inflation remained stubbornly above 10%.

“Certainly, having gone through that, it’s helpful,” said Rich Weiss, a 61-year-old senior portfolio manager at American Century Investments. He started in the industry in 1984, when inflation was finally on the decline, but he remembers how painful the earlier years had been while he was in graduate school.

“Anybody, if they want, can go back to the numbers and see what happens when inflation becomes ingrained, embedded in the fabric of the economy and the markets,” he said. “But it’s different if you live through it.”

The numbers show that the high-inflation era was painfully bumpy for stocks, giving some credence to the worries that are shaking Wall Street now. The S&P 500 tumbled 29.7% in 1974 as inflation shot up to 12.1%. But big gains were interspersed through the period as well, such as a 31.5% surge in 1975.

Brian Jacobsen, a senior investment strategist at Wells Fargo Asset Management, was born a year after that, in 1976.

Most of Jacobsen’s working life has been in an era of ever-moderating inflation and interest rates. He doesn’t know what it was like to live through the trauma of price controls or having to pay a mortgage with a 10% interest rate. But he spent much of his time studying it while earning his doctorate degree in economics.

“Fortunately, experience can be transmitted through generations of investors,” he said.

Like American Century’s Weiss, Jacobsen believes this rise in inflation will be only “transitory,” which is the word Fed officials have used to describe it.

He also talks regularly with colleagues, both retired and still-working, who lived through the last inflation era. Their message to him so far?

“They told me this is nothing,” Jacobsen said. “Mainly because they lived through it before, and they’re like, ’4.2% inflation? Put a 1 in front of that number and then maybe I’ll worry. Don’t wake me until it’s 14.2%.’”

Regular investors logging into trading apps on their phones, though, don’t get to lean on institutional knowledge like that. And experts say they are making up a bigger proportion of trading volume, as waves of new investors jump into the stock market for the first time. That could be adding to the market’s overall unease and volatility.

By some measures, retail investors made up more than a third of all U.S. trading volume for stocks in the early part of this year, up from a quarter in the years before the pandemic.

One difficulty for all investors, big and small, is that there is no clear playbook for navigating high inflation.

Stocks are supposed to be some of the better performers during inflationary periods, but returns there can be volatile too, as evidenced by the 1970s and early 80s.

At Columbia Threadneedle Investments, few fund managers are looking to the historical record to gauge whether long-lasting inflation should be a big worry now, “as we’ve never reopened an economy after a global pandemic,” spokeswoman Liz Kennedy said.

“Many said they needed more data over a longer time period as the economy reopens to really get a sense for how this plays out,” she said.

If that’s the case, be prepared to experience even more swings in the stock market as Wall Street’s biggest question waits even longer to be answered. 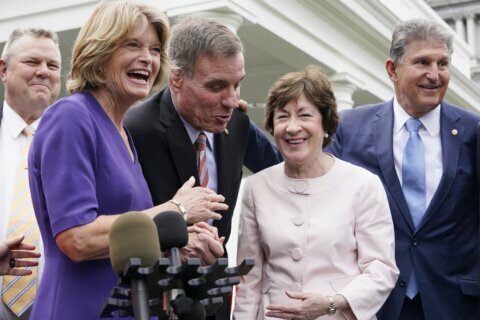