The U.S. economy's growth is likely slowing as 2020 comes to a close, but a growing number of economists expect it to claw back to its pre-pandemic strength by the second half of next year.
Listen now to WTOP News WTOP.com | Alexa | Google Home | WTOP App | 103.5 FM

NEW YORK (AP) — The U.S. economy’s growth is likely slowing as 2020 comes to a close, but a growing number of economists expect it to claw back to its pre-pandemic strength by the second half of next year as vaccines for the coronavirus become widely distributed.

That’s the view from the latest survey of the National Association for Business Economics. It found that 73% of surveyed forecasters say the economy will return to its pre-pandemic level by late 2021. That reflects greater optimism than the forecasters had expressed a couple months ago, when just 38% of them said they thought a full recovery could occur before 2022.

Economists have been saying for months that only when vaccines are widely available to control or defeat the virus will the economy be able to sustain any meaningful recovery from the worst economic downturn since the Great Depression of the 1930s.

Hopes that one or more coronavirus vaccines will roll out soon are helping drive expectations higher, said the survey’s chair, Holly Wade.

Pharmaceutical companies are asking U.S. regulators to allow the use of their vaccine candidates after reporting encouraging data from clinical trials. The hope is that a wide rollout would mean fewer restrictions on businesses next year and more confidence among shoppers and companies to spend more.

In the meantime, the economy is struggling to gain traction. Measures of consumer confidence, which is critical to spending and growth, remain well below their pre-pandemic levels.

On Friday, the government reported that employers sharply scaled back their hiring in November, adding 245,000 jobs — the fewest since April and the fifth straight monthly slowdown. The report provided the latest evidence that the job market and economy are faltering in the face of a virus that has been shattering daily records for confirmed infections.

In the near term, economic activity is likely to slow further, with health officials warning against all but essential travel and states and cities limiting gatherings, restricting restaurant dining and reducing the hours and capacity of bars, stores and other businesses.

But if the NABE’s forecasts are right, a full recovery could be reached by late next year. If so, it would mark a remarkably quick rebound for the economy after its breathtaking plummet during the spring. When the coronavirus was first spreading and governors around the country ordered businesses to shut down, the U.S. economy shrank by a punishing annualized rate of 31.4% from April through June.

The main concern going forward, of course, remains the pandemic. Even if a vaccine is approved quickly, it would be scarce at first, and most people wouldn’t be able to get one for a while. In the meantime, soaring COVID-19 numbers are forcing governments around the world to reimpose varying degrees of restrictions on businesses.

Slightly more than a quarter of forecasters surveyed by NABE, 27%, said the biggest risk facing the economy is inaction by Washington to offer more financial aid. The only risk cited more often was the pandemic itself, at 57%.

Economists and investors have been asking Congress and the White House to provide more support to help carry the economy through what’s expected to be a bleak winter. Momentum on Capitol Hill for a potential deal seems to have accelerated in recent days, but rancorous partisanship has prevented Democrats and Republicans for months from delivering more aid to laid-off workers and industries that have been hit hard by the pandemic.

The National Restaurant Association Research Group, for one, said Monday the U.S. restaurant industry is in a “free fall” and called on Congress to provide aid.

The association said it sent to congressional leaders the results of a survey it conducted last month of 6,000 restaurant operators and 250 supply-chain businesses. It found that 87% of full-service restaurants reported an average 36% drop in sales, and 83% expect sales to be even worse over the next three months.

Sean Kennedy, the association’s executive vice president for public affairs, said in the letter that “for every month that passes without a solution from Congress, thousands more restaurants will close their doors for good.”

The NABE survey covers a panel of 48 professional forecasters, including from Goldman Sachs and Point Loma Nazarene University. 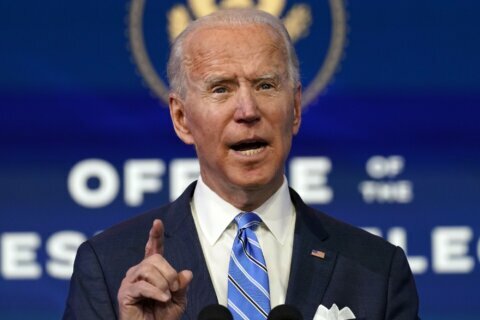