After price cut, Simon and Taubman aim to ring up mall deal

Simon Property Group, the nation’s biggest mall owner, has negotiated a lower price to purchase a controlling interest in Taubman Centers in a deal that was nearly killed by the coronavirus pandemic.

The companies said Sunday that Simon will pay $43 per share for Taubman, down 18% from the price of $52.50 when the deal was announced in February, just weeks before the virus upended the retail industry by causing the temporary closure of many stores across the country. The deal was valued then at $3.6 billion.

Both companies said they agreed to settle litigation in Michigan state court. The case was scheduled to go to trial Monday.

Simon went to court to back out of the original deal, saying Taubman was especially vulnerable because consumers would avoid its indoor malls during a pandemic. It also said Taubman was adding debt instead of cutting costs.

As in the original deal, the Taubman family will sell about one-third of its interest in the company and remain a 20% partner in the Taubman real estate subsidiary. The boards of both companies approved the deal and expect it will close late this year or early next year.

Malls were struggling for years before the pandemic, as more shoppers went online, but their condition grew more dire as the virus led to temporary store closures. Several key mall tenants have filed for bankruptcy this year, including J.C. Penney, Neiman Marcus and J.Crew.

Two mall investors, Tennessee-based CBL Properties and Pennsylvania Real Estate Investment Trust, cited the pandemic in filing for bankruptcy protection this month. Both remain in business while reorganizing their finances.

Simon, based in Indianapolis, owns or holds a stake in more than 200 U.S. malls. Taubman is based in Bloomfield Hills, Michigan, and owns, manages or leases 26 shopping centers in the U.S. and Asia. 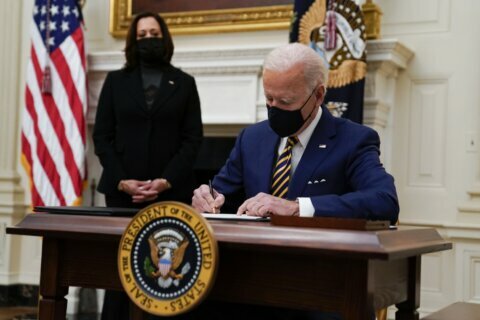 Biden’s executive actions for economic relief at a glance