WASHINGTON (AP) — The U.S. Chamber of Commerce has decided to endorse 23 freshmen House Democrats in this fall’s elections, a bipartisan move by an organization that has long leaned strongly toward Republicans.

The country’s largest business group is also endorsing 29 freshmen House Republicans, said a person familiar with the organization’s decision who described the actions. Even so, the decision has prompted internal divisions, with some state chamber officials criticizing the national group’s decision to back freshmen Democrats in their areas.

The House freshmen the chamber is endorsing include several who face tough reelections, such as Reps. Abby Finkenauer and Cindy Axne of Iowa, Andy Kim of New Jersey, Xochitl Torres Small of New Mexico, Anthony Brindisi of New York, Kendra Horn of Oklahoma, Joe Cunningham of South Carolina and Elaine Luria and Abigail Spanberger of Virginia.

The chamber has a long track record of using most of its political might to back Republican candidates, especially with money. But the organization has had to recalibrate its tactics as the once-reliably pro-business GOP has taken a more populist, conservative hue on issues like immigration and trade, reflecting the views of President Donald Trump and hard-right tea party adherents whose numbers in Congress have grown.

In earlier indications of the chamber’s more bipartisan approach, it has boosted some campaign contributions to Democrats and changed how it assigns publicly released scores about whether lawmakers help business, now factoring in whether they try reaching across party lines.

The moves come as Democrats seem all but certain to continue running the House after November’s elections. Any support for Democrats helps the chamber maintain lines of communication with them, especially as growing numbers of progressive Democrats in Congress makes it harder for business groups to find allies in the party.

Democrats in tough reelection fights can cite the chamber’s backing “as a sort of Good Housekeeping seal of approval,” said Liam Donovan, a lobbyist and former GOP political operative.

The person describing the chamber’s endorsements would only do so on condition of anonymity because they were not authorized to discuss the moves publicly. The decision by the chamber, which issued no statement about the matter, was first reported by The Hill newspaper.

Otherwise, all of the chamber’s $2 million so far in the 2020 campaign on outside spending — money spent without coordinating with candidates — went to helping Republicans, according to the nonpartisan Center for Responsive Politics. So did all of the $40 million in outside spending by the chamber during the 2018 and 2016 campaigns.

Yet the chamber’s much smaller, direct contributions to candidates have been more evenhanded, if politically pragmatic.

The $210,000 the chamber’s political action committee has donated directly to 2020 candidates’ campaigns has been split about evenly between Democrats and Republicans, the center’s data shows. In 2018, about 2-in-3 dollars it gave to House candidates went to Republicans.

The chamber has also contributed $168,000 this year to GOP candidates for the Senate and nothing to Democrats. Since it is unclear if Republicans will continue running the Senate, the chamber’s contributions to Senate GOP candidates have more political weight than spending on the House, where control isn’t in serious doubt.

Some state chambers complained to U.S. chamber officials about the expected endorsements, arguing that the Democratic lawmakers did not have sufficiently pro-business records.

Chad Warmington, president of the Oklahoma state chamber, opposed the expected endorsement of Horn, who was narrowly elected in 2018 to a district centered on Oklahoma City. Warmington said he believes Horn hasn’t been supportive enough of the state’s oil and gas industry.

“A U.S. chamber endorsement can be persuasive in convincing voters that she’s pro-business,” Warmington said in an interview last week. “And I don’t believe there is enough evidence to say she is. I was saying to them, ‘Stay out’” and don’t endorse anyone.

Alan Cobb, president of the Kansas Chamber of Commerce, said he objected to the U.S. organization’s expected endorsement of Davids, from the Kansas City area. Cobb said he prefers Davids’ GOP opponent, Amanda Adkins, a businesswoman and former member of the state chamber’s board.

Warmington and Cobb both said they’d not been consulted by the national chamber about the endorsements. 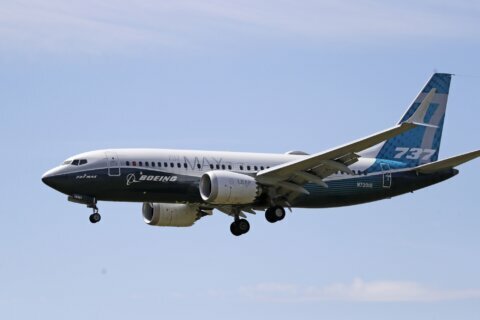