Baltimore launches plan to get squeegee workers off corners

A deadly confrontation last summer — when a teen windshield washer shot an irate, baseball bat-wielding driver near the Inner Harbor during evening rush hour — galvanized disparate opinions about the practice. And on Tuesday, police launched a new program that allows officers to issue panhandling citations in six zones where squeegee work is most common. The planned enforcement marks a major turning point in the city’s approach.

To some city residents and officials, the young men washing windshields for cash are hard-working entrepreneurs trying to survive under difficult circumstances. They represent a host of systemic problems facing Black Baltimoreans, including deep-seated poverty, racism and disinvestment in communities of color. But other downtown drivers consider them a nuisance and public safety hazard.

While city leaders pledged to finally address the root causes, members of the public expressed skepticism about whether this latest effort will provide anything more than a Band-Aid solution.

Past initiatives have come and gone with little impact. Baltimore City Council outlawed the practice in the 1980s, with white council members voting in favor and Black members against. The city opened “squeegee stations,” where youths with approved badges could work after receiving safety and etiquette instructions. But the idea never caught on.

In November, a collaborative of local officials, squeegee workers and other stakeholders presented a plan to combine limited law enforcement action with robust outreach efforts aimed at connecting economically disadvantaged youths with long-term jobs and resources, including mentors and housing support.

But some workers said they were already rethinking squeegeeing after experiencing increased stigma and decreased profits in recent months. For those reasons, along with his mother’s longtime disapproval and his own ambitions, Scott said he decided to turn a new leaf.

“It’s like I was standing still when I could’ve been accomplishing so much more,” he said.

Scott, 22, said he started squeegeeing about five years ago because he needed money to help support himself. He estimated his recent daily earnings fluctuate between $40 and 200.

Scott attended a career readiness fair Friday afternoon hosted by the Baltimore mayor’s office. He hopes to earn his GED and become a firefighter someday.

Many squeegee workers grow up in poor, majority-Black communities. Squeegeeing allows them to earn money while avoiding the drugs or gang violence plaguing many Baltimore neighborhoods.

Scott said squeegeeing also gave him a unique brand of customer service. His number one rule: When in doubt, just walk away — because “two wrongs don’t make a right.”

With an infectious smile and unassuming demeanor, Scott bemoaned the small group of “knuckleheads” who give Baltimore squeegee workers a bad name.

Some drivers have reported getting scammed after handing over their cellphones to make payments through money transfer apps. Others have complained about squeegee workers darting through traffic at dangerous intersections.

In response to the Inner Harbor shooting, Republican Maryland Gov. Larry Hogan reiterated claims that some people were afraid to come downtown because of squeegee workers. He blamed city leadership.

Scott was skeptical about the new enforcement plan. But ideally, he said, the threat of criminal citations would motivate his peers to seek other opportunities. City officials didn’t respond to questions Monday about whether they plan to add more enforcement zones in the future.

On Tuesday, outreach workers were present at some downtown intersections, but they said most windshield washers were already informed about the changes. Officials also posted signs warning people against entering the roadway at high-traffic intersections.

“We’re being proactive,” said Andrey Bundley, director of the Baltimore Mayor’s Office of African American Male Engagement. “The goal is to never get to issuing citations.”

Jason Bass, director of culture and impact at the Revival Hotel in Baltimore, which currently employs three former squeegee workers, said he hopes that number grows.

“These kids know how to work through hard times,” he said.

Many squeegee workers have to overcome multiple barriers before joining the workforce. Some are too young. Others lack proper identification, stable housing, reliable transportation and work clothes. Officials have repeatedly stressed the importance of meeting those underlying needs.

“There is no silver bullet,” Baltimore Deputy Mayor Faith Leach said during a public hearing last year. “We have an opportunity to serve as a national model for how to treat Black boys. They are not a problem to be solved; they are the sons of Baltimore and they deserve our very best.”

Shamonte Jones, 22, was squeegeeing Tuesday morning at his usual intersection, which falls outside the enforcement zones. He said he doesn’t plan to stop anytime soon. He works at least eight-hour days and makes decent money. His savings are growing. Plus, he’s made countless friends and acquaintances — drivers sometimes offer him jobs and other opportunities, Jones said. He hopes to invest in real estate someday.

Jones, who proudly showed a picture of himself celebrating high school graduation, believes the city should implement an application process for squeegee workers instead of banning them from certain intersections.

“The problem is they’re treating all squeegee boys the same,” he said.

Derwin Catchings, 23, said he keeps coming back to squeegeeing because the payout is immediate, allowing him to help with family expenses over the past several years.

But now his girlfriend is pregnant, they recently moved in together and he’s looking for more stable employment. He’s optimistic about the next chapter.

Perhaps most importantly, he said, squeegeeing has taught him perseverance — how to accept rejection and keep moving. Countless drivers might refuse his services, but there’s always another windshield, another red light, another dollar. 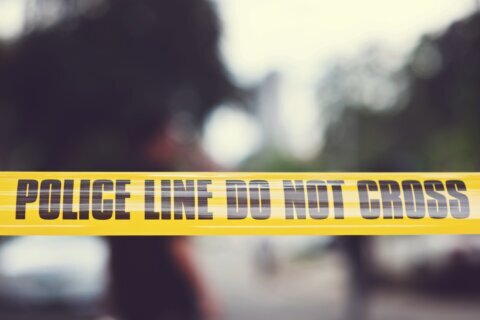