BALTIMORE (AP) — Educators in Baltimore say an enormous infusion of federal dollars for COVID-19 relief has the potential to transform aspects of district school programming while also providing a rare opportunity to make some long-needed infrastructure upgrades.

John Davis, the Baltimore district’s chief of schools, said the system has some “very audacious plans” for the one-time federal recovery aid with a mix of infrastructure upgrades, programming and direct COVID-19 mitigation efforts.

The school system got $48 million in the first round. Some $198 million must be used by the end of September 2023. The final round of relief funds will provide a whopping $443 million.

Whether or not the district will use the windfall to “dream big” as the Biden administration has urged is not yet clear. An initial priority is educating youngsters in safety amid the ongoing pandemic. In Baltimore, classrooms will be operating on a five-day-a-week schedule come Aug. 30 and millions are being spent on pandemic-related equipment such as air purifiers. Some $13 million is earmarked for “indoor air quality.”

Davis said this kind of spending is necessary. “We will make classrooms safe,” he said.

Last school year, Baltimore was the first major school district in Maryland to successfully return to in-person instruction in classrooms.

Other spending will go toward WiFi hotspots and laptops for students and staff. Some will directly help struggling students, including anticipated spending of some $4.6 million on mental health clinicians and programming.

One plan is to extend the school day for struggling children so they can catch up with personalized instruction. Infrastructure is also being targeted including upgrades to some HVAC systems.

Since March 2020, the federal government has provided $190 billion in pandemic aid to schools, an amount that’s more than four times what the U.S. Education Department spends on K-12 schools in a typical year. The Associated Press, relying on data published or provided by states and the federal government, tallied how much money was granted to nearly every school district in the country.

The aid averages nearly $2,800 per student nationally, but it varies widely by district and state, according to the AP’s analysis. Nationwide, high-poverty areas received much more under the funding formula. In Baltimore, the federal funding per student equals $9,117.

There are no shortage of local critics who are fed up with the track record of Baltimore’s school administration and are skeptical the district will make the best use of the money. Baltimore City Schools already spends about $16,000 per student each year. That’s only behind the spending per student in New York City, Boston, Atlanta and nearby Montgomery County, Maryland. It also has outsized administrative spending.

“History has shown that the Baltimore City school system is inefficient, ineffective and is failing to educate our children. There seems to be no accountability,” said an email from members of the People Empowered by the Struggle, a nonprofit that’s calling for the resignation of the district’s CEO.

Many Baltimore schools have no shortage of challenges, particularly those in deeply disenfranchised areas. And as is the case with other districts, data has offered a grim picture of academic progress amid the pandemic.

Youngsters notching failing grades have soared in Baltimore and in other districts across Maryland. Last school year, the city’s district saw a jump in chronic absenteeism and some 60% of students in middle and high school got “not complete” for grades K-8 or “no credit” for grades 9-12 in at least one or more classes.

The Baltimore Teacher’s Union says the district has not released complete information about how federal aid will be spent.

“We have not seen an increase in staffing overall, and many teachers and clinicians are reporting instances of overcrowding in their classrooms and caseloads,” the union said.

Davis said the district has to think about what it can viably sustain since the one-shot funding will end in September 2024.

Baltimore is in the top 50 largest school systems in the country. The system has nearly 80,000 students, roughly 10,000 employees, and a $1.18 billion budget, largely funded by the state. 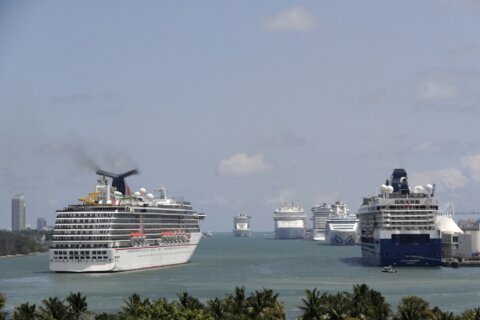