Baltimore’s spending board Wednesday approved over half a million dollars for a man who served four years behind bars after two members of a rogue police unit arrested him on a firearm charge following a traffic stop.
Listen now to WTOP News WTOP.com | Alexa | Google Home | WTOP App | 103.5 FM

BALTIMORE (AP) — Baltimore’s spending board Wednesday approved over half a million dollars for a man who served four years behind bars after two members of a rogue police unit arrested him on a firearm charge following a traffic stop.

It’s the 30th case settled by Baltimore in the wake of a federal corruption probe into the crooked plainclothes police unit, costing taxpayers nearly $15 million in settlement costs so far in a city chronically struggling to respond to any number of serious challenges.

The spending panel, which includes Baltimore’s mayor, unanimously approved the $525,000 settlement to Robert Johnson, who was in a car pulled over by two members of the police department’s Gun Trace Task Force. They claimed they found a gun in the car during the 2014 traffic stop.

Johnson initially pleaded guilty to the charge but sued years later, alleging a gun was planted by members of the once-lauded plainclothes unit that was supposed to take guns off the streets but resold stolen drugs, conducted robberies and falsified evidence. The weapons charge against Johnson was eventually withdrawn.

By authorizing the payment, the city will eliminate litigation costs and avoid a lawsuit that could have played out in court testimony and filings. Deputy Solicitor Darnell Ingram said settling with Johnson was in the best interests of Baltimore because “the facts could be favorable for the plaintiff and not the city,” among other reasons.

Comptroller Bill Henry, who is also on the spending panel, asked Ingram how much Maryland’s biggest city has spent providing defense counsel for the officers who are the defendants in Gun Trace Task Force cases. Ingram could not immediately provide those details.

“I know it’s been very frustrating for a lot of people that the taxpayers are on the hook to defend officers who have already been convicted of serious crimes,” Henry said during the meeting.

Wednesday’s payout was one of the bigger settlements in Baltimore’s grim Gun Trace Task Force saga. The police corruption scandal has triggered one massive payment so far: A roughly $8 million settlement to two men who went to prison for years after drugs were planted on them a decade ago during an encounter with members of the police task force. One of those exonerated men now faces charges for allegedly shooting his girlfriend and shooting at law enforcers during a high-speed chase in Virginia.

In contrast, Baltimore reached a $6.4 million settlement with the family of Freddie Gray, a young man who suffered a critical spinal injury in the back of a police van in 2015, triggering major protests and the city’s worst riots in decades.

Officials say four additional cases related to the Gun Trace Task Force are outstanding — three in federal court and one in state court.

Johnson could not be reached Wednesday. But one of his lawyers, A. Dwight Pettit, said his client was satisfied with the financial settlement. “He’s been through a lot,” he said.

Baltimore officials initially kicked against various lawsuits following the disgraced police unit’s exposure, asserting that a pact with the police union covering law enforcers’ lawsuit damages could be sidestepped because their criminal actions were way beyond anything that could be defined as reasonable “scope of employment.” But the city’s spending board has steadily been settling lawsuits since last year.

Eight members of the Gun Trace Task Force were convicted of corruption charges and sentenced to prison. Their crimes led to hundreds of criminal cases getting vacated or dropped. 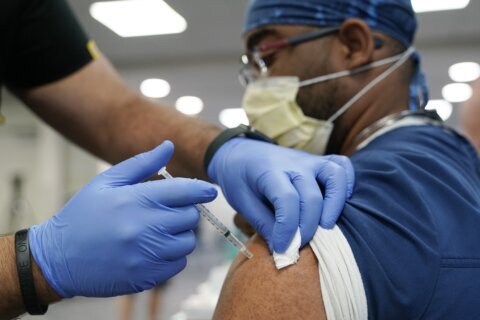 Baltimore offering $1,000 to city employees who get vaccine

Portrait of Elijah Cummings to be exhibited in Baltimore before moving to U.S. Capitol