Woman after woman has settled into Yasmine Young’s salon chair and explained that she needed to change her hair to conform with the expectations of a boss.
Listen now to WTOP News WTOP.com | Alexa | Google Home | WTOP App | 103.5 FM
(1/5) 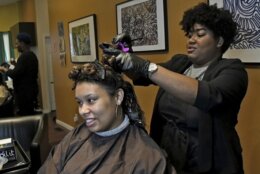 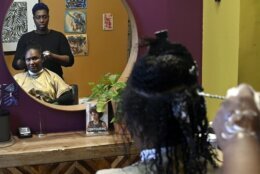 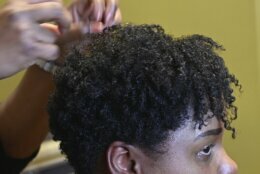 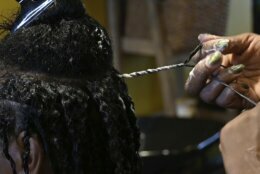 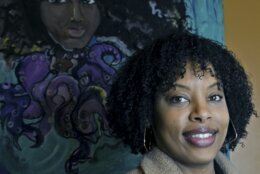 BALTIMORE (AP) — Woman after woman has settled into Yasmine Young’s salon chair and explained that she needed to change her hair to conform with the expectations of a boss.

Recently, it was a real estate agent who was told that her locks didn’t fit the company “look.” Sitting in Charles Village’s Diaspora Salon, the woman had to make a choice.

“She combed the locks out,” Young said. “We hear that story a lot.”

This kind of pushback against hairstyles often worn by people of color could soon be explicitly banned in Baltimore, as the City Council looks to join a growing wave of cities and states prohibiting discrimination based on hair texture and style.

The city is about 63% African American.

Black people across the country have been barred from jobs, schools and public events because they choose to style their hair in locks, Afros and twists. Some say they face implicit or explicit pressure to wear their hair in a way that conforms to more European standards of beauty, and spend huge sums to chemically straighten and maintain their hair.

And while more and more people have embraced natural hair in recent years, the stories of discrimination still surface, reverberating through the African American community and elsewhere.

There was the white referee in New Jersey who told a teenage black wrestler to cut his locks or cover his hair if he wanted to participate in a bout; the teen got a mat-side haircut. A 6-year-old boy was turned away on his first day at a Christian school in Florida because of his long dreadlocks. NBC reportedly fired actress Gabrielle Union after producers said her hair was “too black,” according to Variety.

In 2015, a former Baltimore “Hooters Girl” was awarded more than $250,000 after complaining that a manager at the restaurant’s Inner Harbor location told her that her blond highlights weren’t permissible because “black people don’t have blond hair.”

Before Young opened her North Baltimore salon, she, too, was pressured by a former boss to “tone down” her hair, which she wore in a twist out. That style, she was told, was “too wild.” Management at the graphic design firm wanted it straight.

“It hurt,” she said. “I felt like even though I was doing an excellent job, I was friendly and worked well with customers, they choose to say something about my hair.”

Baltimore’s Office of Civil Rights and Wage Enforcement is collecting data on how many complaints of hair-related discrimination the city has received in the past decade. Director Darnell Ingram said he fields complaints “periodically,” but the issue is likely underreported.

“Once it’s codified into law, people will be better informed and start adjusting the cultural norms,” he said. “Will it end it full stop? That’ll take some time.”

Terra Bowen-Reid, a psychology professor at Morgan State University, said hair-based discrimination in the United States can be traced back to slavery and is not always blatant. It can come in the form of microaggressions, looks and stares. It can be an assumption that a woman with natural hair is unprofessional or unkempt. It can be a boss commenting that a person doesn’t fit the company’s image, and shouldn’t get a promotion.

“Some people will say, ‘It’s just hair, get over it,’” she said. “But for African Americans, it carries a deeper psychological meaning. … You start to question: ‘Do people not accept me because of my appearance?’”

California, New Jersey and New York have passed laws similar to the one being considered in Baltimore. In Montgomery County, lawmakers passed legislation last month that prohibits discrimination against natural hairstyles, including “braids, locks, Afros, curls and twists.” Businesses and others can be fined up to $5,000 for violating the law.

The Baltimore bill would add hair texture and style to the city’s law barring discrimination in schools, workplaces and housing. A city commission investigates discrimination complaints and can impose penalties.

Del. Stephanie Smith plans to introduce a bill in the upcoming General Assembly session that would ban discrimination based on hairstyle and traits associated with race.

“To be frank, I wish this was unnecessary,” the Baltimore Democrat said. “It’s not something I’m excited is necessary. Nonetheless, I think it’s important.”

She said she hopes it isn’t dismissed as just a “women’s issue.”

City Council President Brandon Scott said he understands that firsthand. He and the rest of the all-Democratic council are co-sponsoring the city bill. As a college student preparing to enter the professional world, Scott was told he should cut off the braids that went past his shoulders.

“What they were essentially saying to me is that my hair mattered more than my ability,” he said. Once he cut his hair, “I felt like I was leaving something behind. You shouldn’t have to do that.”

He said the council plans to move quickly to approve the legislation.

At Young’s salon, the sentiment behind the bill was met with appreciation.

Tiffani Willis, an analyst with the U.S. Department of Justice, got a hairstyle Friday (Jan. 3) that she said represented the first time she’d be wearing it in its natural state. She’s excited about her new short, curly look, even if she does wonder what kinds of comments it will generate at work.