By the time the sun came up Wednesday, all four of Baltimore's controversial statues were gone, and some of the sites were covered in spray paint and other graffiti.
Listen now to WTOP News WTOP.com | Alexa | Google Home | WTOP App | 103.5 FM
(1/15) 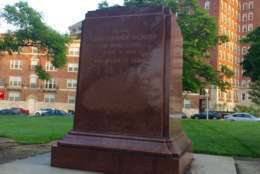 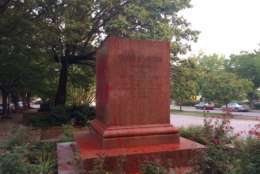 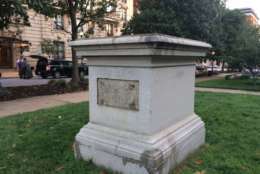 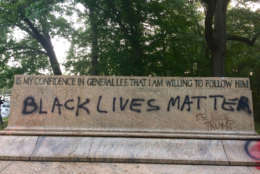 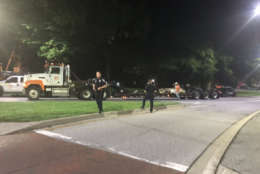 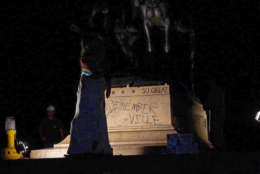 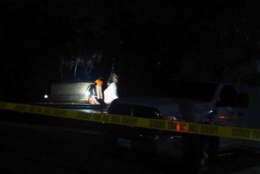 BALTIMORE, Md. — Just a couple days after Baltimore lawmakers approved a resolution to tear down Confederate monuments in the city, officials made quick work of it very early Wednesday morning, removing the controversial statues within a matter of hours.

By the time the sun came up, all four of the city’s statues were gone, and some of the sites were covered in spray paint and other graffiti.

“The folks that are displayed in these monuments were traitors to the United States of America, and we should not honor traitors with monuments,” said Baltimore City Councilman Brandon Scott when the council voted on the matter Monday.

“We should not have these anywhere for public display,” Scott said. “These monuments are being used as beacons of lightning for vile racism.”

Baltimore’s statues included a Confederate women’s monument, a statue for soldiers and sailors, a statue of Roger Taney and the Lee and Jackson Monument.

Mayor Catherine Pugh said they would all be removed following the council’s vote.

“The monuments are being stored until we decide what is the best course of action for them,” the Baltimore mayor’s office said.

“I’m impressed that it happened so quickly,” said Baltimore resident Bonnie Crawford. “These monuments tend to glorify people who fought for ideals that actually compromised the lives of citizens in this country.”

The developments in Baltimore come after the chaotic events in Charlottesville, Virginia, over the weekend when white nationalists clashed violently with counter-protesters. The incident centered around efforts to remove a Confederate monument in Charlottesville.

Maryland Gov. Larry Hogan is asking for the removal of a statue of Roger Taney that sits on the front lawn of the State House.

Hogan said in a statement on Tuesday that he believes it is the right thing to do.

The Republican governor’s statement came a day after House Speaker Michael Busch, a Democrat, said the monument “doesn’t belong” at the State House in Annapolis.

WTOP’s Patrick Roth and The Associated Press contributed to this report.