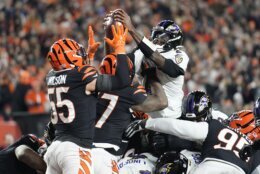 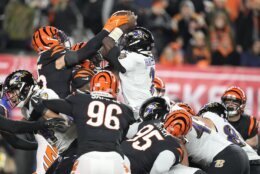 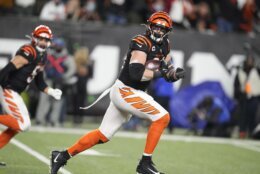 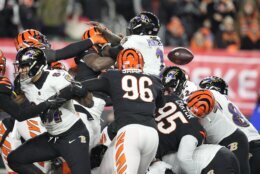 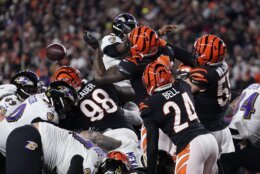 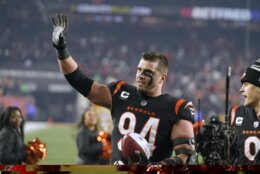 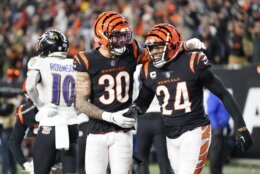 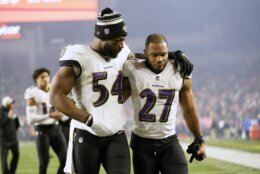 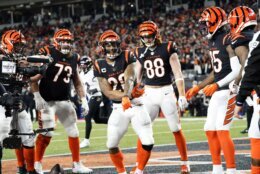 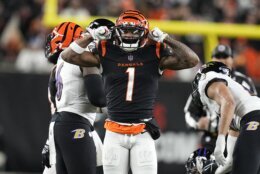 CINCINNATI (AP) — The ball went right to Sam Hubbard, and the defensive end took off down the field. All the way down the field in his hometown.

On an unforgettable wild-card run.

Hubbard returned Tyler Huntley’s fumble 98 yards for a tiebreaking touchdown in the fourth quarter, helping Joe Burrow and the Cincinnati Bengals beat the Baltimore Ravens 24-17 in the first round of the AFC playoffs on Sunday night.

“You can’t even dream that one up,” Hubbard said. “It’s pretty special.”

Facing third-and-goal at the 1 with about 12 minutes left, Huntley tried to go over the top of the line for the go-ahead score. But he was stood up by Germaine Pratt and stripped by fellow linebacker Logan Wilson.

Hubbard got the ball at the 2, and he was helped along by a convoy of teammates on the longest fumble return for a touchdown in NFL postseason history. It also was the longest go-ahead TD in the fourth quarter in the postseason.

“That’s why you never give up on a play, even inside the 2,” Bengals coach Zac Taylor said.

Moments after the defensive TD for the Cincinnati native, with the Paycor Stadium crowd of 66,399 still buzzing, Hubbard sucked on oxygen as he sat on the bench on the sideline.

“To make the play and be the guy to come through is an amazing feeling,” Hubbard said.

Baltimore drove down to the Cincinnati 17 in the final minute, but Kevin Zeitler was flagged for holding and Huntley threw incomplete to the end zone on the final play.

“I feel like we controlled this game from start to finish, and it just didn’t turn our way,” Baltimore tight end Mark Andrews said.

Ravens coach John Harbaugh said Huntley was supposed to go low on the play that resulted in the fumble.

“That’s the way the play is designed,” he said. “We felt that was the best call. We just didn’t execute it right.”

Playing behind a patchwork offensive line, Burrow passed for 209 yards and a touchdown for the AFC North champions. He also had a 1-yard touchdown run a week after the Bengals beat the Ravens 27-16 in the regular-season finale.

A year after Cincinnati made a surprise run to the Super Bowl, it won a playoff game for the second straight postseason for the first time in franchise history.

“Hard-fought. That’s how it is in the playoffs, especially when you play a divisional team for a third time,” Burrow said. “It’s never going to be easy.”

Next up for Cincinnati (13-4) is a trip to Buffalo for a rematch of their Week 17 game that was canceled after Bills safety Damar Hamlin went into cardiac arrest on the field. With Hamlin watching from home, Buffalo advanced with a 34-31 victory over Miami on Sunday.

Playing without Lamar Jackson once again because of the quarterback’s knee injury, Baltimore (10-8) managed two offensive touchdowns for the first time since Nov. 27. Huntley passed for 226 yards and two TDs, but he also had a costly interception.

Hubbard’s dramatic trip to the end zone sent the Ravens into a uncertain offseason centered around the future of Jackson, who is eligible for free agency. The 2019 MVP got hurt during a 10-9 win against Denver on Dec. 4, and he did not travel with the team to Cincinnati for the playoff game.

Huntley was intercepted by Cincinnati linebacker Akeem Davis-Gaither on the second attempt of his first postseason start. The Bengals turned the miscue into Burrow’s 7-yard touchdown pass to Ja’Marr Chase early in the second quarter, but they had to settle for a 9-0 lead after Evan McPherson missed the extra point.

Huntley stepped up after the early trouble, leading the Ravens on a 17-play, 75-yard drive that lasted more than 10 minutes. J.K. Dobbins got Baltimore on the board when he stretched the ball over the goal line for a 2-yard touchdown reception.

A fumble by former Baltimore tight end Hayden Hurst set up Justin Tucker’s 22-yard field goal in the final seconds of the first half, giving the Ravens a 10-9 lead at the break. The biggest play of the scoring drive was a 19-yard reception by Josh Oliver after Huntley had to run back to recover a high snap that went off his hands.

The Bengals lost left tackle Jonah Williams to a left knee injury in the first half. They already were playing without right tackle La’el Collins and right guard Alex Cappa due to injuries.

Baltimore had been 6-0 on the road in wild-card games.

The Bengals are going to Buffalo to take on Josh Allen and the AFC East champion Bills (14-3).