The Baltimore Ravens essentially have two versions of the victory formation: One is when the quarterback takes a knee to run out the clock. The other is when Justin Tucker comes on the field to attempt a game-winning kick.
Listen now to WTOP News WTOP.com | Alexa | Google Home | WTOP App | 103.5 FM
(1/6) 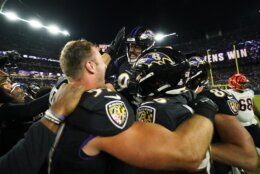 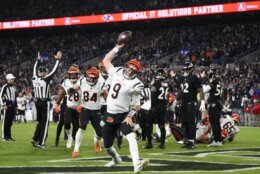 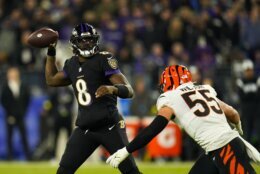 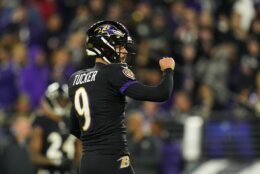 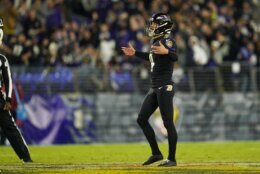 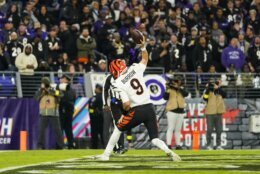 BALTIMORE (AP) — The Baltimore Ravens essentially have two versions of the victory formation.

One is when the quarterback takes a knee to run out the clock. The other is when Justin Tucker comes on the field to attempt a game-winning kick.

“We’ve got the GOAT at kicker,” Lamar Jackson said, using the acronym for “Greatest of All-Time.”

Tucker kicked a 43-yard field goal on the final play to lift the Ravens over the Cincinnati Bengals 19-17 on Sunday night and into sole possession of first place in the AFC North.

Tucker also made a 58-yard kick in the third quarter, and even when the Ravens (3-2) fell behind 17-16 on Joe Burrow’s 1-yard sneak with 1:58 remaining, they could feel confident because they only needed a field goal. Tucker’s game-winner extended his streak to 61 straight successful field goals in the fourth quarter and overtime.

He is 17 for 17 in his career on attempts in the final minute of regulation.

“What matters in those 1.3 seconds between snap, hold and the kick, are the things that are going to help the kick go through the uprights,” Tucker said. “My feelings, my emotions — for 1.3 seconds, they don’t really matter, whether I’m feeling very confident or nervous or even outright afraid. That’s partly why I always make it a point to say a brief prayer as I’m lining up to kick — not to ask for results, but to ask for peace and to show gratitude just for sort of being able to be in that moment.”

Jackson shook off a rough night passing, leading the Ravens with his arm and his legs on the winning drive. Baltimore blew leads of 21 and 17 points in its previous two home games when it lost to Miami and Buffalo. The Ravens squandered a 10-point lead in this one but recovered.

It was a remarkable turnaround for the Baltimore defense, which allowed 41 points in each of two losses last year to the AFC champion Bengals. This time the Ravens kept Burrow and Ja’Marr Chase mostly under control and pulled off an impressive stand in the third quarter after Cincinnati (2-3) had first-and-goal from the 2.

The Bengals trailed 13-10 when they wasted that opportunity. The key play was a 12-yard loss when Cincinnati tried a reverse pass on second down. A third-down completion put the Bengals back at the 2, but then a shovel pass on fourth down went incomplete.

“They played it well,” Burrow said.

The Ravens then drove all the way to the other end of the field for a short field goal that made it 16-10. Tucker’s earlier kick from 58 had broken a 10-all tie. After that one, he stood near midfield and posed in celebration with his arms outstretched.

“I’ve celebrated in many a humorous way over the years,” he said. “Also, you’ve got to save a little bit for the end of the game too. So I don’t want to peak too early.”

Baltimore took a 10-0 lead on Jackson’s 11-yard scoring pass to Mark Andrews in the second quarter, but the star quarterback was intercepted in Cincinnati territory on his next drive.

The Bengals scored on a 19-yard pass from Burrow to Hayden Hurst, and the game was tied by halftime.

Baltimore improved to 19-2 in prime time games at home under coach John Harbaugh.

All three of Cincinnati’s defeats this season have been on field goals on the final play.

“We’ve lost three games on the last play of the game,” Bengals coach Zac Taylor said. “I told the guys, ‘We’ve got to keep taking our shots, and the season will even itself out’”

This was also the 10th consecutive loss for the Bengals in a Sunday night game.

A week after his decision to go for it on fourth down at the Buffalo 2-yard line in a tie game backfired, Harbaugh had a few more tough calls to make.

In the third quarter, the Ravens went for it on fourth-and-3 from the Cincinnati 41, but Jackson overthrew a wide open Tylan Wallace, who likely would have scored. After Burrow threw an interception, Baltimore had fourth-and-4 from the 40. That time, Harbaugh had Tucker try his kick from 58.

The Ravens faced fourth-and-1 from the 3 in the fourth, but instead of going for it, Baltimore kicked a short field goal that made it 16-10. That meant the Bengals had a chance to take the lead with a touchdown — which they did — but because the Ravens kicked a field goal there, three points was enough on their final drive.

Cincinnati WR Tee Higgins went without a catch and exited with a left ankle injury. … Ravens S Marcus Williams left with a dislocated wrist, and Harbaugh expects him to miss a significant amount of time. … Baltimore T Ronnie Stanley (ankle) played for the first time since last season’s opener. 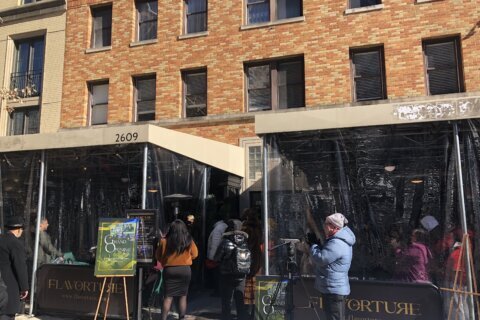