Lamar Jackson's record-breaking afternoon included a long touchdown run, three scoring passes and another 100-yard rushing performance to pass Michael Vick for most by a quarterback. About the only thing that went wrong for the Baltimore Ravens' versatile quarterback was that all his heroics came in a losing effort.
Listen now to WTOP News WTOP.com | Alexa | Google Home | WTOP App | 103.5 FM
(1/5) 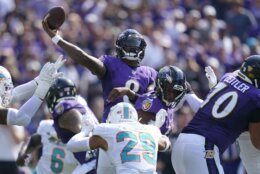 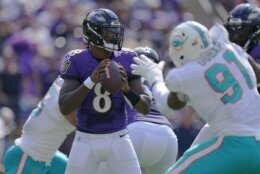 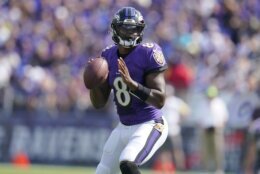 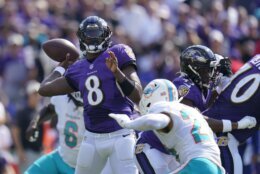 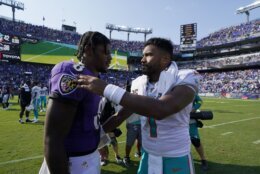 BALTIMORE (AP) — Lamar Jackson’s record-breaking afternoon included a long touchdown run, three scoring passes and another 100-yard rushing performance to pass Michael Vick for most by a quarterback. It was no small measure of redemption against a team that last season left the 2019 MVP beaten and embarrassed.

About the only thing that went wrong for the Baltimore Ravens’ versatile quarterback was that all his heroics came in a losing effort.

Jackson shredded the Miami Dolphins for 119 yards rushing, and he passed for 318 yards without an interception. But he couldn’t play defense and could only watch in dismay from the sideline while the Miami Dolphins scored four fourth-quarter touchdowns in a 42-38 comeback victory Sunday.

“We’ve got 15 more games regular season. We’re not going to let this define us,” Jackson said after the Ravens (1-1) let a 21-point lead vanish.

This game, however, could very well define Baltimore’s gifted star.

When facing a blitz-heavy scheme last year in Miami, Jackson struggled to find open receivers or a place to run. He was sacked four times, intercepted once and limited to 39 yards rushing in a 22-10 defeat.

On this occasion, Jackson torched the Dolphins for a 79-yard touchdown run and threw a 75-yard score to Rashod Bateman, making him the first quarterback in NFL history to produce TDs on the ground and in the air of at least 75 yards in a single game.

Jackson also set an NFL regular-season record for quarterbacks with his 11th 100-yard rushing game, breaking a tie with Vick. It was his third game with at least three TD passes and 100 yards rushing, most in the Super Bowl era.

With Jackson leading the way, the Ravens amassed 473 yards and averaged a whopping 8.8 yards on their 54 plays.

It was a darn impressive showing, one that caught the eye of Miami quarterback Tua Tagovailoa, who himself had a spectacular day — 36 for 50 for 469 yards and six touchdowns.

When he wasn’t ripping up the Baltimore defense, Tagovailoa was checking out Jackson doing his thing.

“How can you not watch someone like that? He had a great game as well,” Tagovailoa said.

Better still, it came against a team that frustrated him last November with a series of blitzes that forced him to make decisions on the fly.

“We watched film, and like I told you guys earlier this week, we were going to have something from it,” Jackson said.

Although he didn’t get a win, Jackson certainly vindicated himself after last year’s debacle in Miami.

“He definitely put to bed those issues he had last year,” Dolphins coach Mike McDaniel said. “We knew it wasn’t going to be the same formula. Some situations came up when we audibled to some of the pressures, and they took advantage of it. Good for them.”

Jackson’s showing on Sunday seemingly justified his decision to put off contract talks until after this season. A few more games like this, and the Ravens might be forced to pay a steep price to hold onto such a talented quarterback. 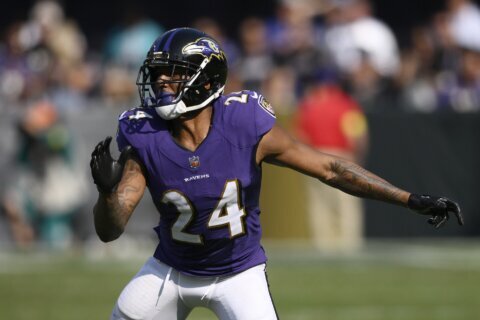 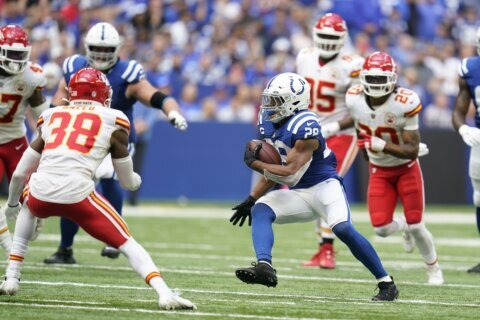