Jackson says there could be ‘cutoff’ point for negotiations

Lamar Jackson's contract negotiations are lingering into training camp, and the Baltimore quarterback says at a certain point, it could be time to put those talks aside.
Listen now to WTOP News WTOP.com | Alexa | Google Home | WTOP App | 103.5 FM

BALTIMORE (AP) — Lamar Jackson’s contract negotiations are lingering into training camp, and the Baltimore quarterback says at a certain point, it could be time to put those talks aside.

“There’s probably going to be a cutoff at some point, yes,” Jackson said Thursday.

The latest update from the Ravens’ star quarterback wasn’t exactly earth shattering: Yes, negotiations are ongoing. No, he wasn’t going to publicize details about topics such as guaranteed money. Yes, he thinks a deal will eventually get done, and yes, he hopes that will be before the season.

The most significant takeaway was probably the fact that Jackson seems willing to put a deadline on negotiations. That’s not a huge shock — contract talks during the season can be a distraction — but it suggests that if the Ravens don’t reach a long-term deal with him soon, this saga could stretch into next offseason.

“I get to talk to both sides, and both sides are very motivated to get the job done,” coach John Harbaugh said. “So, I feel like that’s kind of where it’s at.”

This season is Jackson’s fifth-year option, and it’s surprising that his contract status remains so uncertain. Josh Allen, another star quarterback drafted the same year as Jackson, signed his big extension last offseason. Kyler Murray received one earlier this month, and he was drafted a year after Jackson.

Still, the fact that this negotiation is going differently doesn’t mean it needs to cause drama.

The franchise tag means the Ravens don’t have to worry too much about losing Jackson after this season, and neither side has shown any significant acrimony publicly. Jackson missed voluntary OTAs but was in attendance for mandatory minicamp, and he was on the field for the start of training camp this week.

Jackson sounds comfortable with the fact that the negotiations between him and the team have generally been kept private.

Harbaugh said TE Charlie Kolar is having sports hernia surgery next week. The Ravens drafted Kolar in the fourth round this year out of Iowa State.

“He actually had a sports hernia in college and had a surgery. They’re going to redo that one as well,” Harbaugh said. “It’s just something that’s not too much different than Rashod Bateman last year, who had the lingering issue coming from college. So, we’ll get it cleaned up now. Would have loved to have gotten it cleaned up earlier, but we didn’t have it really earlier. I think he felt like he could manage it, but it’s gotten to the point where it needs to be fixed.” 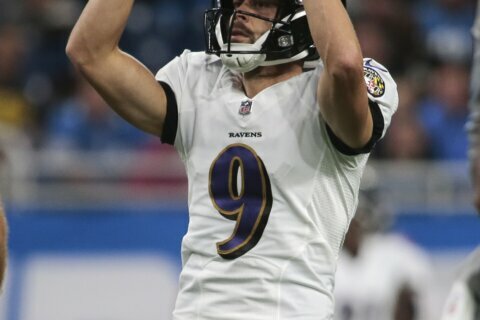