Aside from trading Marquise Brown — at the wide receiver’s request — there wasn’t a lot of wheeling and dealing from Baltimore. The Ravens kept most of their picks, waited and had talented players such as Kyle Hamilton, David Ojabo and Travis Jones fall to them.

“We had a good plan,” general manager Eric DeCosta said. “I think we were patient — strategic, as best as possible. You think about every possible situation along the way. Obviously, the trade was something that created another level of anxiety that I was spending time on.”

Baltimore came into the draft with 10 total picks, including five in the fourth round. The Ravens added an extra first-rounder in exchange for Brown and a third-rounder. Then they traded down in the first round and added another fourth-rounder.

So, they had six picks in Saturday’s fourth round — and used all of them.

“Every time we’d get close, three phones would ring — ‘Do you guys want to trade back?’” DeCosta said. “We maybe discussed it once or twice, but we just decided, ‘You know what, we got six picks, let’s use them.'”

While Baltimore obviously hopes some of those fourth-round selections pan out, it was the players chosen in the first two days that probably have the most potential. Hamilton was considered a possible top-five selection, and Baltimore got the Notre Dame safety at No. 14. Then the Ravens picked center Tyler Linderbaum of Iowa with a newly acquired first-rounder at No. 25.

Ojabo, the injured pass-rushing star out of Michigan, went to Baltimore in Round 2. He’d have likely gone much higher if he hadn’t torn an Achilles tendon at pro day. Then the Ravens landed Jones, an interior defensive lineman out of Connecticut.

Baltimore drafted punter Jordan Stout of Penn State in the fourth round. That could mean the Ravens will soon move on from 39-year-old Sam Koch, who has played for Baltimore for all 16 of his NFL seasons.

Koch has the most punts with one team in NFL history, and he is the Ravens’ career leader in games played. DeCosta said the team had been in communication with Koch before drafting Stout.

“I’ve never been around a better pro than Sam,” coach John Harbaugh said. “Jordan will come in here and learn from him, and we’ll just see where it goes.”

Last season, the Ravens made it a priority to add more help for quarterback Lamar Jackson on offense. That included drafting receiver Rashod Bateman in the first round. Bateman figures to play a bigger role after Brown’s departure.

Baltimore did not draft any wide receivers even after trading Brown, although they did take two tight ends (Charlie Kolar of Iowa State and Isaiah Likely of Coastal Carolina) in the fourth round.

The Ravens were decimated by injuries last season and finished below .500, but they did not shy away from drafting players who have had health issues like Ojabo and Hamilton, who missed time last year with a knee injury.

Jalyn Armour-Davis of Alabama, a cornerback chosen in the fourth round, missed the 2018 season with a knee injury and was not a huge contributor for the Crimson Tide until this past season.

“It is always very frustrating when you’re not able to play, injury or not, especially when it’s really out of your hands,” Armour-Davis said. “Anything that I’ve had happen to me was just unfortunate events. There was really nothing that I could’ve done differently about it, but I wouldn’t have wanted it any other type of way. I’ve learned many lessons during those times.”

DeCosta said at one point, the Ravens had a hard time tracking down the phone number of a player they were trying to reach, but having so many picks in one round wasn’t too much of a problem.

“It was fun,” DeCosta said. “The nice thing about the fourth round was that … pretty much every five to seven picks, we were making a pick. So it went by very fast.”

In addition to Stout, Armour-Davis, Kolar and Likely, the Ravens also took Minnesota tackle Daniel Faalele and Houston cornerback Damarion Williams in the fourth round. Baltimore took Missouri running back Tyler Badie in the sixth. 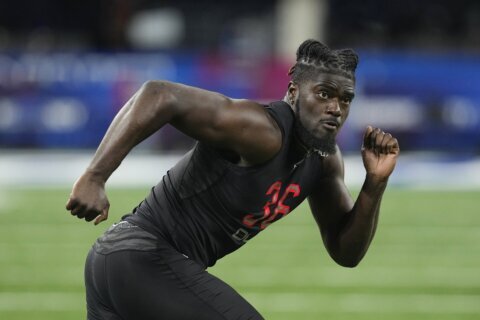