TAMPA, Fla. (AP) — Pro Bowl center Ryan Jensen was simultaneously celebrating his daughter’s birthday and contemplating his future in the NFL when he got a phone call from Tom Brady, who was about to announce he was returning to the Tampa Bay Buccaneers.

“It was the icing on the cake at the end of a great day,” Jensen said Tuesday, reflecting on his decision to re-sign with the Bucs rather than leave via free agency.

“At that point I was pretty much already committed to coming back to Tampa,” Jensen added. “And obviously, that’s the sugar on top.”

Brady ended his 40-day retirement on Sunday, saying he has “unfinished business” after winning 29 games, a Super Bowl title and a NFC South championship in two seasons with the Bucs, who lost to the Los Angeles Rams in the divisional round of the playoffs two months ago.

The Bucs placed the franchise tag on Godwin for the second straight year. With Brady returning, the team no longer is in the market for a starting quarterback. Re-signing Jensen and reserve guard Aaron Stinnie moved the club closer to addressing a need to replace up to three regulars on the offensive line.

Jensen joined the Bucs in 2018, signing a four-year, $42 million contract in free agency after beginning his career as a sixth-round draft pick of the Baltimore Ravens. He has started all 71 games (65 regular season, six playoff) the team has played since his arrival.

“When we originally signed Ryan four years ago, we thought he was one of the best centers in the league and he has only elevated his level of play in his years with us,” Bucs general manager Jason Licht said.

“He also brings a toughness and grit that sets the tone for our offensive line, which has become one of the best units in the NFL,” Licht added. “Ryan is a key component of our football team and keeping him was a major priority for us this offseason.”

Jensen said he had no real desire to leave the Bucs. And it wouldn’t surprise him if Brady’s return also influences the plans of other players weighing their options.

“Talking with Tom it was just like, ’Hey, let’s try to get the band back together and go out and try to win football games and play football the right way,” Jensen said. “Obviously, Tom coming back, that could sway some decisions of some guys that are in free agency or looking to sign back.” 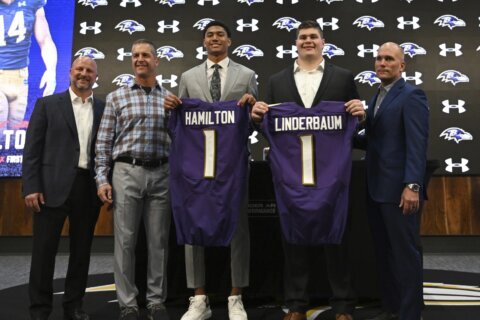