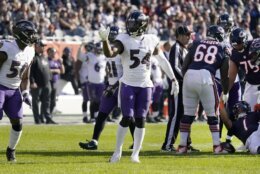 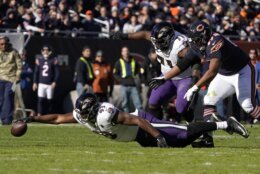 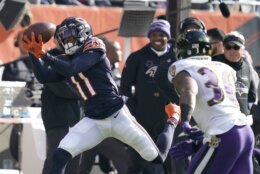 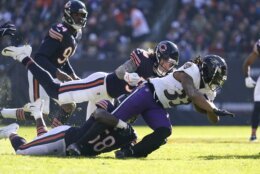 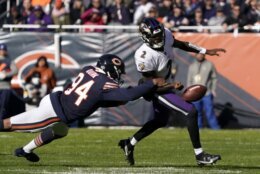 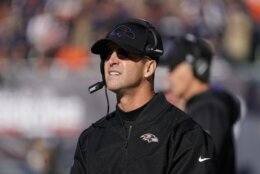 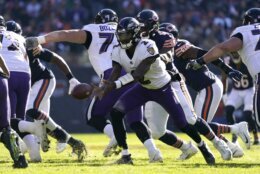 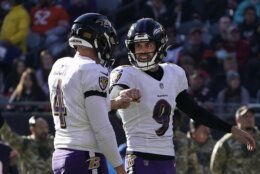 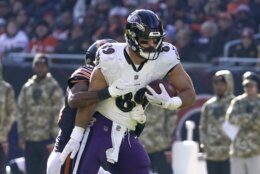 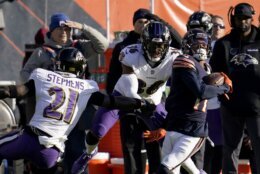 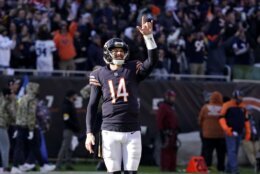 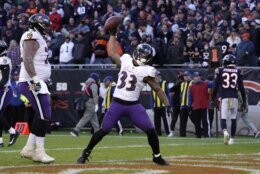 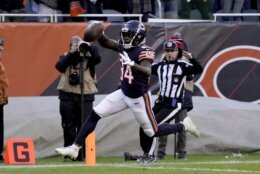 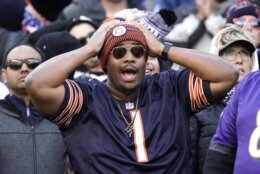 CHICAGO (AP) — Tyler Huntley was on the way to the game Sunday when he got the message from Lamar Jackson.

The Ravens’ star quarterback was too sick to play.

“It’s crazy,” Huntley said. “I was walking toward the bus and Lamar texted me. He said, ‘Go do your thing today and (I’ll be) watching.’”

Jackson was sidelined by illness for the AFC North-leading Ravens (7-3), who ruled him out 90 minutes before kickoff after he took some throws on the field. The 2019 MVP was a full participant in practice Friday after being held out the previous two days.

Coach John Harbaugh said the illness is not COVID-19 or influenza. He said Jackson seemed to be feeling better after the game, though he expects him to keep getting tested.

“He had it (Saturday), he had it on the plane,” Harbaugh said. “He had it in the meetings at night. We were hoping that he was going to wake up feeling better. He didn’t. He felt worse.”

Justin Tucker kicked three field goals, and the Ravens came away with the win after losing the previous week at Miami.

The Bears (3-7) lost their fifth straight.

Chicago’s Andy Dalton threw two touchdowns, including a 49-yarder to an open Marquise Goodwin in the closing minutes. Justin Fields had left the game with injured ribs in the third quarter.

Dalton found Goodwin deep down the middle on fourth-and-11 to cap a 75-yard drive and put Chicago on top 13-9 with 1:41 remaining. Even though the 2-point conversion pass failed, the Bears appeared to be in good shape.

But Baltimore answered with the 72-yard touchdown drive. Freeman ran it in after Huntley’s 29-yard pass to Sammy Watkins put the ball on the 3, and the Ravens came out on top even without their best player.

“I think it means a lot,” cornerback Marlon Humphrey said. “I think going into the game, there’s a lot of not knowing what was going happen. We have two corners go down. All week, you don’t have Lamar and then he comes back Friday and you’re like, ‘We’re good, we’re good.’ Then, you see him on the plane curled up in a ball and I look over, I’m like, ‘I don’t think this guy’s gonna be able to play.’ It was just crazy.”

Huntley completed 26 of 36 passes for 219 yards in his first career start. The second-year pro who was undrafted out of Utah also threw an interception and got sacked six times in his fifth pro appearance.

Fields took a big step backward following several promising outings. The rookie was 4 of 11 for 79 yards after throwing for a career-high 291 yards at Pittsburgh two weeks ago.

Coach Matt Nagy had no update on the extent of his injury after the game or his status for the game at Detroit on Thursday.

“When you’re talking about ribs, you’ve gotta find out how much it affects him,” Nagy said. “We as a staff have to talk through all that.”

“I prepare the same way I’ve prepared this whole year. So if I’m starting I’ll be ready to go,” he said.

Dalton, who started the first two games before a knee injury in Week 2 against Cincinnati, came in with 8:46 left in the third quarter and quickly threw a 60-yard touchdown to Darnell Mooney on a screen to give the Bears a 7-6 lead. The veteran was 11 for 23 for 201 yards.

It just adds to the Chicago fans’ frustration. And they let the Bears hear it, showering them with boos.

“We don’t go out there to lose a game or mess up a game,” linebacker Alec Ogletree said. “And we want to give the fans something to cheer about. But like I said, we have to find a way to correct our mistakes and do the right things.”

Ravens: Campbell suffered a foot injury away from the ball on the first drive of the second half. He went down as the teams lined up following a catch by Mooney.